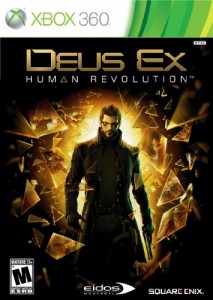 Deus Ex: Human Revolution takes place in a moody tech-noir near-future in which nearly everyone seems to have settled on a yellowish color scheme. And more importantly: people are getting ‘augments’, technical enhancements grafted onto or into their body, which give them special abilities. This is the big moral issue of the era: should people be getting such augments or does it make them less than human somehow? To what degree should it be allowed and regulated? Will it create a new class of humans, leaving the regular folk behind? And as people who have been augmented need to keep taking expensive medication to keep functioning, does this put them at the mercy of big corporations, who could ultimately use them to do their evil bidding? People ponder these ethical questions and – it seems – little else. Overheard conversations, newscasts, strewn about newspapers and e-books almost completely focus on the same topic, which does give it some weight but also makes the game world seem small somehow.

Your vessel through this world: Adam (biblical reference alert) Jensen, a corporate guy with nifty hair, a gravelly, monotonous voice, cool shades and a mysterious childhood, who has been outfitted with augments up the wazoo after a near-death experience. For reasons of gameplay, these can only be activated one-by-one, using ‘Praxis kits’ that can be bought or found, but are mostly earned through acquiring experience points during the missions you carry out to find out what happened to you lost-and-presumed-dead scientist lady lover and to unravel a corporate conspiracy. In turn, the special skills you get help you ramp up for the trickier missions that are to follow. The fun is in deciding on the order in which you activate the augments, which will depend on how you want to play the game. You can choose a stealth approach and try to slip by guards undetected, finding alternate routes. You can focus on hacking computers and safes to find loot, access otherwise closed-off areas or to turn the enemies’ gun turrets and robots against them. Or you can more or less fight your way through with guns ablaze, though this does not seem to be the designers’ favorite mode of play. Even with his protective ‘dermal armor’ leveled up to the max, Adam is still fairly vulnerable to bullets, so any gunfight is likely to take place from behind cover, perhaps ending in a quick sprint to your assailant to knock him out if you are trying to be non-lethal.

Curiously, the boss-fights in the game require that you to have upped your defenses and come packing heat, which is a cold splash in the face to people focusing on stealth. The development of the bosses was apparently outsourced to a different game studio which did not get the ‘multiple approaches should be possible’ memo. Especially the first boss is a real pain, as Adam starts out weak and is barely a match for him at that point. Tip: if you don’t want to have to worry about the bosses, pick the two upgrades for the Typhoon early on, which allows you to send out a 360 degrees shockwave. Two hits of this makes any boss fight an extremely short one; just make sure to conserve the rare ammo for it for bosses and emergencies. And steering clear of spoilers: there is a decision to be made about halfway through the game which will greatly impact how difficult the third boss-fight is. If you don’t want to run the risk of making the wrong choice, look up a walkthrough. 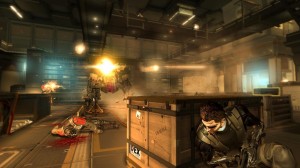 My personal approach: I always started with stealth, knocking out as many guards as possible for the experience points. If I got caught and/or bored I would clear an area with my non-lethal tranquilizer dart gun (looking back, I’d advise the stun gun instead) or the more lethal 10mm, shotgun or revolver. Due to your limited inventory, the game constantly has you weighing exciting new weapons against sticking with the ones you have lovingly upgraded. I stuck to my guns, so to speak. I hacked any computer I could find even if I had a password at the ready, also for the experience points. Then I went looking around the areas I’d cleared for hidden paths. Regularly when I thought I was going somewhere new, I found out I had actually discovered an alternate route into the place I just left. Though you do have to upgrade some of the hacking and stealth skills a little, on the whole it’s best to focus on those that allow you to find these routes, by lifting the heavy objects blocking them, busting through walls, jumping higher or falling down from a height without killing yourself. Also an augment to put on your shopping list early-on is the ‘social enhancer’ which allows you to manipulate people in conversation into doing what you want, which really helps along the main story. Beware: some of the available augments are actually completely useless, so think about the practicality of them before potentially wasting a Praxis.

Stealth can be fairly tricky: the guards have perfect vision, spotting you through windows and from far away, but they lack logical reasoning or the ability to bend at the knees to peek into and/or follow you into near-the-ground ducts or over obstacles. Encountering a barrier, they will hang around nervously for a while and then wander off, going ‘Oh, well – I guess he’s gone.’ Even if you are just barely out of sight in the same duct they just saw you get into and there is a big pile of bodies in front, from panicked guards whom you just kept shooting in the legs until they dropped.

The humans populating the Deus Ex world aren’t the most engaging bunch in general unfortunately. The facial animation and body movements in the – oddly dark – cut scenes aren’t all that great and seem – ironically – mechanical. They are also lacking in the behavioral department: as you go about ransacking credits and supplies from all over the place, the owners of these goods more often than not just blankly stare at you while you do it, even if you just broke into their house. (Oddly, there is no moral consequence to taking other people’s stuff and it even seems expected.) IQ’s in general do not seem to have gone up in the future: passwords are scattered everywhere on little tablets called ‘pocket secretaries’ to the point of ridiculousness and people have taken to letting their credits (money) lie around out in the open for anyone to take. The game designers occasionally poke fun at their own artificialities: you may find an internal memo on a computer stating that employees can only have a maximum of four e-mails on their computer (which is indeed the max you will find per pc) or you’ll come across a pocket secretary containing a password plus an admonishment to the employee who owned it to be extra-super careful with it and delete it straight after use. 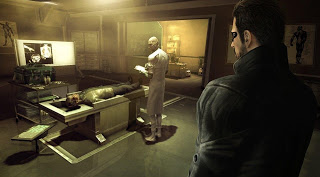 Deus Ex: Human Revolution is a prequel to Deus Ex, a game (which I did not play) renowned for its story. Considering the pedigree, the lack of involvement I felt with the characters was disappointing. And even though it is a large game, the world felt small seen as a whole because of the strong focus on just the augmentation theme and because of the handful of side-missions all taking place just a few blocks away from the main missions. There is a whole lot of optional text to read in the form of e-mails and e-books, deepening the world in theory, but a lot of these are a bit dry, so I ended up just glossing over most of them. There are multiple endings, but rather than these growing organically from how you played the game, you simply pick one on the spot. On the plus side: if you save right beforehand and go back to that save, you can see all the endings in a row. And the ending – no matter which one you pick – does come with a voice-over that acknowledges how you played the game: in my case it told me that I mostly took the moral high road, generally knocking people out instead of killing them. There is no closure to your relationship with the various other characters, however, and considering one of the possible endings, a sequel starring Adam seems unlikely. Also a bit odd is that apparently, no matter what decision you make, the world will end up in the same state 25 years down the road when the story of Deus Ex begins, meaning your decision is ultimately irrelevant.

To sum things up: Deus Ex: Human Revolution is a game well worth playing, no so much for the story as for the atmosphere (featuring moody, futuristic music seemingly lifted straight out of Mass Effect 2) and for the gameplay. The fun is in strategically upgrading and broadening your already ample options to tackle the various missions in the way you enjoy most. Oh, and one last thing: if playing on a console with a hard drive, install it on there, as during the loading screens when playing off the disc, I grew a fair amount of beard. 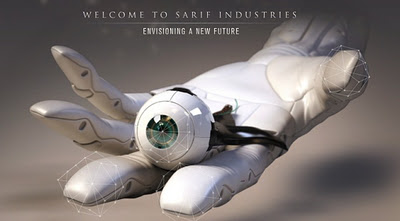