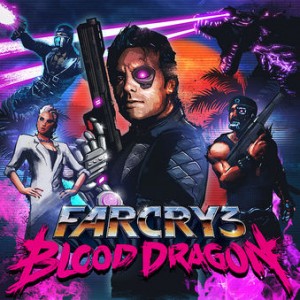 Far Cry: Blood Dragon is a love letter to the eighties and more specifically to that decade’s magnificently cheesy science-fiction and action movies. Someone savvy at production company Ubisoft, decided to use the basic building blocks of Far Cry 3 and to repurpose them, giving them a fresh lick of paint. Blood Dragon has clear similarities with the main game, but can be bought and enjoyed as a stand-alone. There are, again,  enemy bases to liberate, collectibles strewn about the landscape you traverse and plenty of faceless enemies to kill in a manner of your choosing. The experience is more streamlined, with less padding than the main game, but the gameplay is familiar. There is leveling up, though this time it is an automatic process. You can get upgrades to weapons by playing through some optional missions, but there aren’t so many of them that doing them all feels like a chore. Especially if you are just coming off the main game, the shorter playtime is a good thing as Blood Dragon could otherwise easily have worn out its welcome.

The plot doesn’t bear much pondering and its tongue is in its cheek so hard it’s a wonder it doesn’t puncture it. Basically, you are a Good bionic soldier who has to stop an Evil bionic soldier. The meat of this story, in so far as there is meat, is told in lovingly crafted 16-bit cut scenes, which especially older gamers will be able to appreciate for reasons of nostalgia. However, the parts where you are in control, are rendered in glorious current-day graphics, with a first person perspective. The esthetic is futuristic retro, with a lot of neon, and the color scheme is predominately purple with splashes of green, red and blue. The music pays homage to Blade Runner, The Terminator and also seems influenced by Daft Punk’s Tron soundtrack. Aliens and Terminator veteran Michael Biehn does the gruff voice-acting honors for your alter-ego.

The island you find yourself on is populated by Blood Dragons who have lasers for eyes (naturally), disposable mercenaries whose hearts you can rip out (with a purpose, though also for laughs) and scientists whom you are supposed to protect, although it really doesn’t matter to the plot whether or not you succeed. I witnessed on at least two occasions, presumably scripted, that a scientist accidentally offed himself just after having been liberated by me. There’s a cheekiness to it all, also evident in the mission objectives (“Unique Horn Dragon. It’s Magical and Wonderful. Now go kill it.”), your character’s baffled response to the stupidity of them, his random tough-guy one-liners (“This little piggy went to the morgue.”) and during the loading screens (“Need credits? Pilfer bodies. There’s absolutely nothing morally objectionable about that.”). 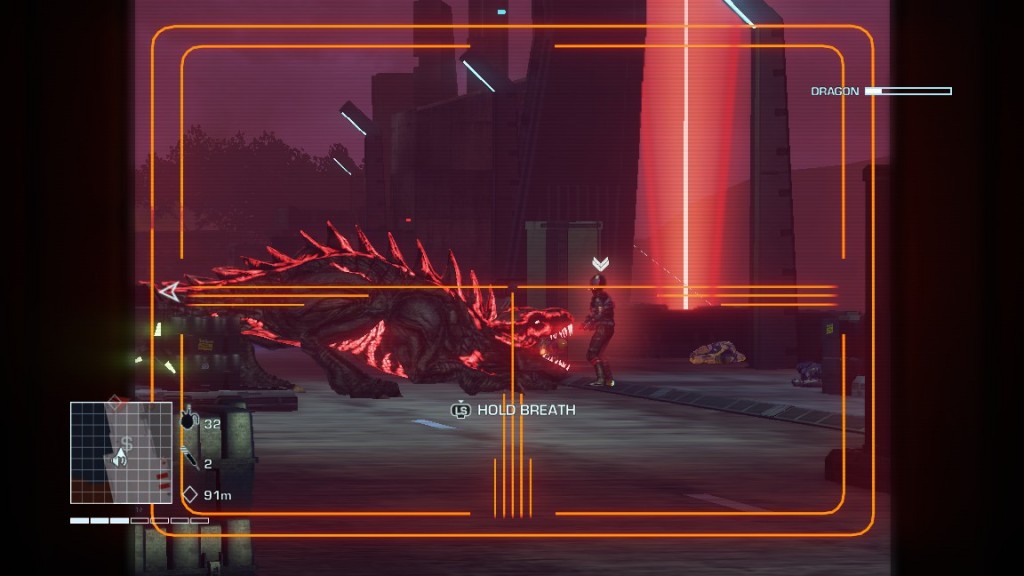 If you play Blood Dragon right after Far Cry 3, it is entertaining to spot the redressed elements and game mechanics. For instance, I have a suspicion that the ‘bear’ A.I. is at work below the pixilated surface of the Blood Dragons. Be it with added laser eyes, of course. Not all of the re-used elements make sense, however. Among the otherwise high-tech opposition are fidgety-looking guys specialized in throwing Molotov cocktails, who make the same nervous jumps their equally pyromaniac counterparts did in Far Cry 3. If you didn’t play the main game, I imagine that kind of stuff will have you scratching your head at the randomness of it.

The Blood Dragons give you some welcome new options for taking over an enemy base. Find a power generator located at a back entrance, lower the protective force field at the entrance and then lure a Blood Dragon inside by throwing some cyber-hearts in the direction you need it to go. Sit back to watch the Dragon zap all your enemies and lure it outside again to finalize your hostile takeover. 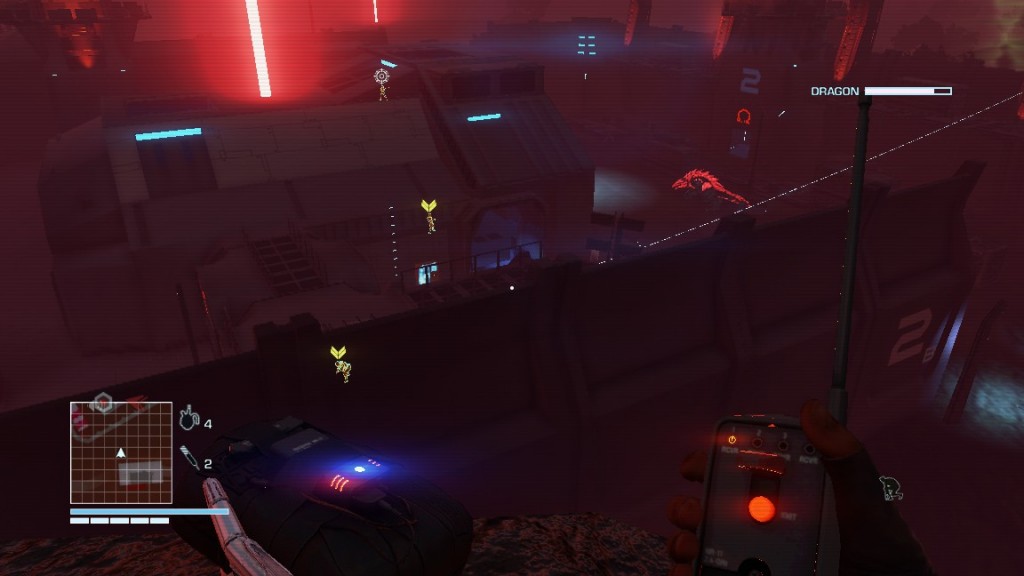 The games paces itself oddly. It is pretty level in difficulty, not especially hard give or take a bump or two, until you cross through a mystical door (don’t ask) to the final stages. Then it flings hordes of enemies at you for a while until it becomes annoying. Just as frustration starts to set in, you are rewarded with a weapon that takes any challenge out of the rest of the game. It’s like playing a game in God-mode, and it makes you feel invincible. That’s fun, but it is just as well that you are close to the end at that point, as it could easily start to bore.

Blood Dragon‘s biggest misstep is its finale. The game builds up to an epic confrontation with the main bad guy. It has you battle your way to his front door, only to take the control away from you once you are face-to-face. The final confrontation takes place in one of those 16-bit cut scenes as you passively watch. Either this was misguided game design, or the developers ran out of budget when they got to the final level. I suspect the latter.

Nevertheless, especially if you are a child of the eighties, this is a game you shouldn’t pass up. Even if Far Cry 3 doesn’t appeal to you, and even if you aren’t quite in tune with the game’s sense of humor, because – really – who can say ‘no’ to Dragons with lasers coming out of their eyes? 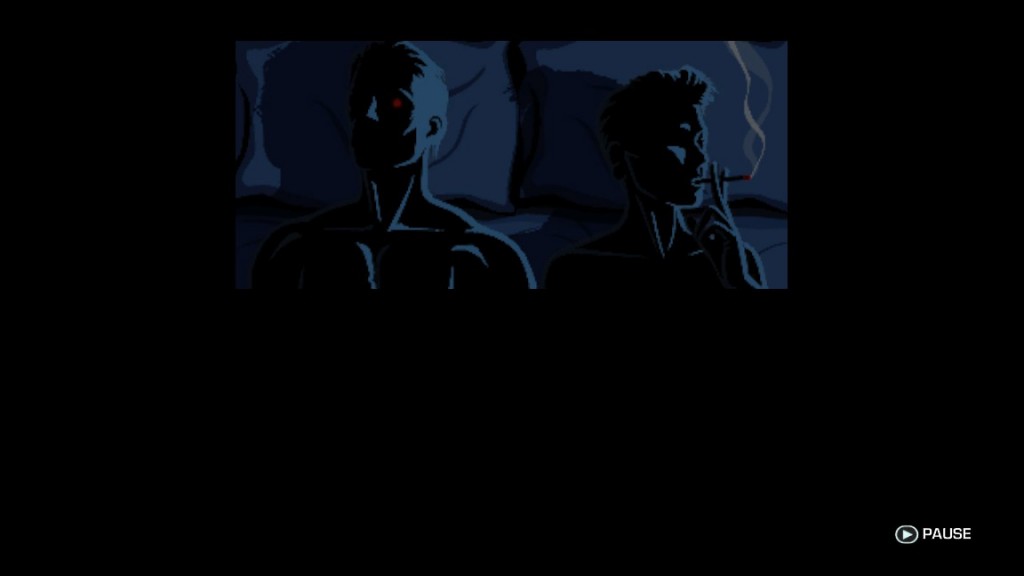 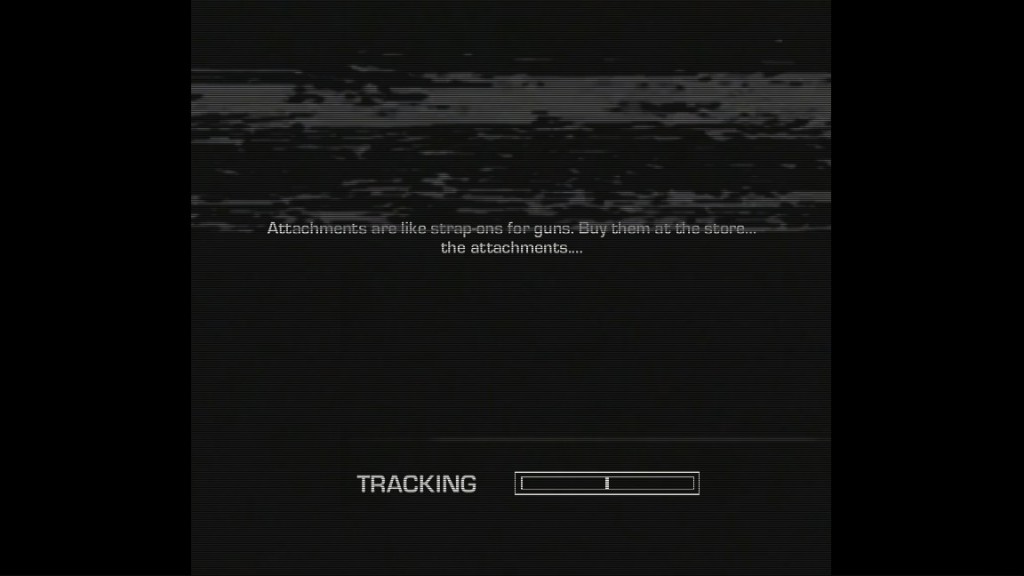