Jazzpunk is odd, and this is in no way accidental. In fact, the game tries a bit too hard to be odd and strains something in the process. Being free-form is to be expected from a game with the word ‘jazz’ in its title, but with a little more focus and a bit more restraint, the oddness could have been put to better use. And I’m not sure if the ‘punk’ part of the title means the makers thought they were being subversive, but their end product doesn’t have a strong enough bite.

You play a secret agent of sorts, who gets sent out on a couple of short, surreal missions. That is pretty much all you need to know as far as the story goes. It serves to throw you into a few medium-sized levels that you could run through very quickly if you were simply fullfilling your mission objectives. But the fun is in poking around at everything and everyone in those levels, trying to find hidden jokes. For instance, when spoken to, a lady may ask for your help in swatting some flies who are on the loose in her shop filled with breakable fine China. You may now predict how this turns out. The game serves up more mini-games like this, though they tend to be bare bones and hardly qualify as games, mini or otherwise. None of them are something you will want to revisit, including the wedding-based shooter ‘Wedding Quake’. I am a fan of surreal and lame humour in the vein of Airplane! and Hot Shots! and Jazzpunk does occasionally serve up a good laugh. But a lot of the jokes are a bit too random and a bit too lazy, assuming that something would be funny for the simple fact of being absurd. Frequently I would run into a joke and find myself thinking ‘Ah, right. Well, that’s certainly silly.’ rather than ‘Hey, that was funny!’ The writing could have been sharper and the jokes would have benefitted from some sense of build-up and cohesion, rather than being scattered around as stand-alones. It’s also a shame that you can’t really have conversations with characters. You can only prod people until you’ve heard all the dialogue someone has to offer and he or she loops back to the beginning. Listening to the dialogue starts to feel like work when you’re trying to not miss out on anything and are dutifully prodding away. 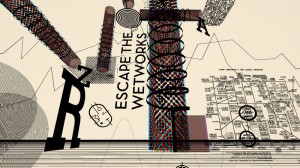 I liked the visuals. The graphics are simple but stylish, and the weird look of the ‘human’ characters certainly makes Jazzpunk look unique. There is a completely abstract level set inside a computer that looks so interesting that it’s a shame the gameplay doesn’t make better use of it. The voice-acting is a bit sloppy. Especially the male voices just sound like a dude – mostly the same dude – warping his voice in a variety of ways and reading out lines without really ‘acting’. The flat reading takes the air out of some of the jokes. 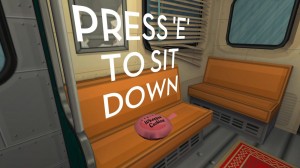 A word of caution about saving your progess. The game never saves your progress automatically or suggests that you do so. I had at one point played for quite a while when the game crashed to the desktop and I had to replay from the last time I remembered to save. Thankfully, the second time you can skim through the levels by just sticking to the basic requirements, but it was still an annoyance.

Jazzpunk definitely had potential. But it needed to be smarter, tighter and a bit more polished. As it stands, it’s worth a quick look for being intriguingly weird, but only if the price is appropriately low. It’s over in the blink of an eye if you don’t explore, but then the exploration is the thing that makes the game worth investing some time in. My final rating lands somewhere in between Jazzflunk and Yesspunk. See what I did there?