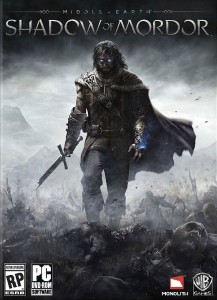 Combine the free-flowing fighting system from Batman: Arkham City with a whole bunch of elements from Assassin’s Creed, then dip the results in a Tolkien sauce and – voila – you have Middle-Earth – Shadow of Mordor. To be fair, the game doesn’t just strongly call to mind other games, it also adds some interesting twists of its own. Mainly that it gives you a hierarchy of enemies to fight, who may team up on you. But more on that in a bit.

ME-SoM is about a warrior (or ‘Ranger’ in Middle-Earth terms) who can’t die, even though he would like to, to be reunited with his loved ones. His essence has become entangled somehow with an equally undead Elf. The Elf guides him and lets him know that there is someone who can undo the curse and allow him to die. To get to this man, the Ranger will have to cut a bloody path through an army of Orcs, starting with the low-ranked ones and working his way to the top. 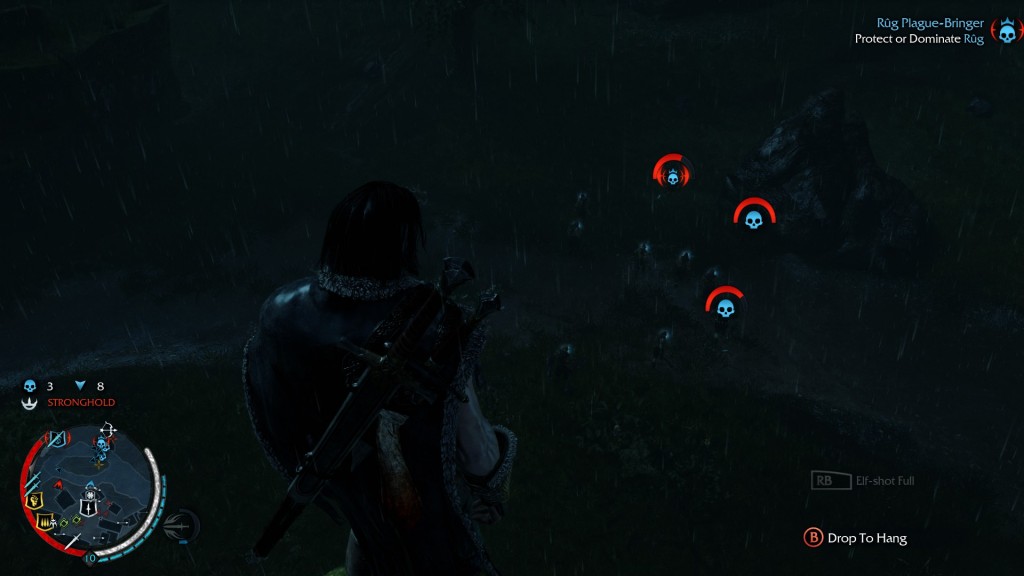 Playing the game, you won’t care much about the story, which feels both too simple and too vague, not really fleshing out its characters. The tale also lacks momentum, given with how much time you will spend aimlessly but joyfully running around a large, open world map. The focus of this game, instead, is a whole lot of bloody slaughter as you go on bite-sized missions to level up and hunt for collectibles. There are leagues of butt-ugly respawning Orcs and fierce creatures for you to knife, shoot and/or manipulate in ways stealthy or not-so stealthy, but always gleefully. The addictiveness of the game doesn’t come from wanting to know how the story will play out, but from unlocking the next special move or perk that will make the slaughter easier and more varied. 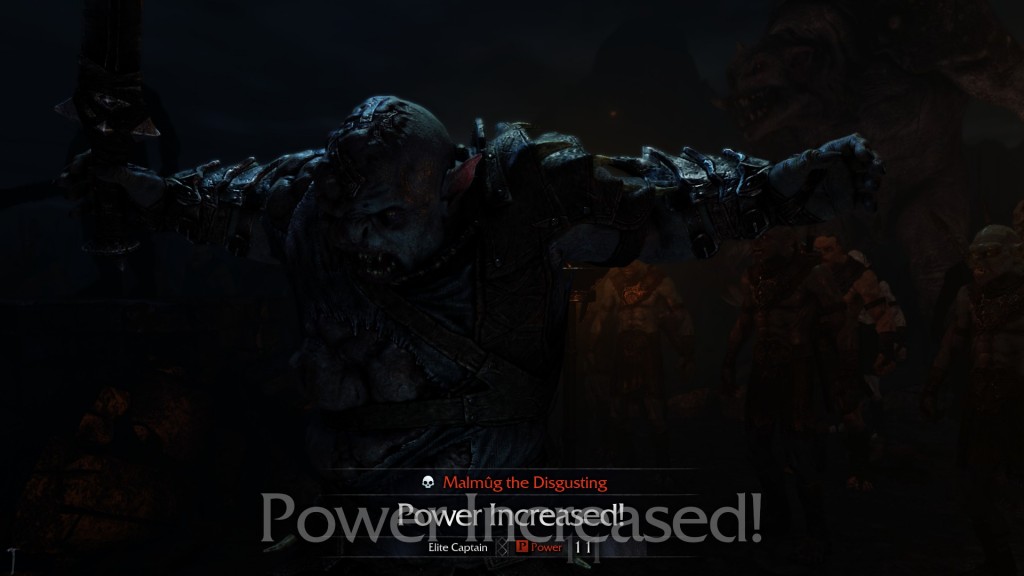 The game’s most unique asset is a bit hard to explain and involves you fighting your way up through the Orc’s army hierarchy. Suffice to say that you need to take out the top tier of the army but that you will want to take out the lower-tier bodyguards first. If you don’t, these will come to their superior’s aid and make for a really tough fight. If an Orc manages to kill you, though not permanently because of your curse, he will get a promotion, grow more powerful and recognize you when you face off with him again. During your time being dead, there will also be some shuffling in the ranks of the army, Orcs you killed in the past possibly being replaced with new ‘Chiefs’. Killed Chiefs don’t always stay dead and may return for a rematch. This system could be a bit glitchy as I once faced off four times against the exact same Chief over a very short period of time. On the other hand, the same guy (‘Kuga the Red’) reappeared one last time during the final battle, labelled my ‘Nemesis’ so maybe the game was just trying to build a grudge. Alas, my Nemesis turned out to be fairly fragile and easy to dispose of. 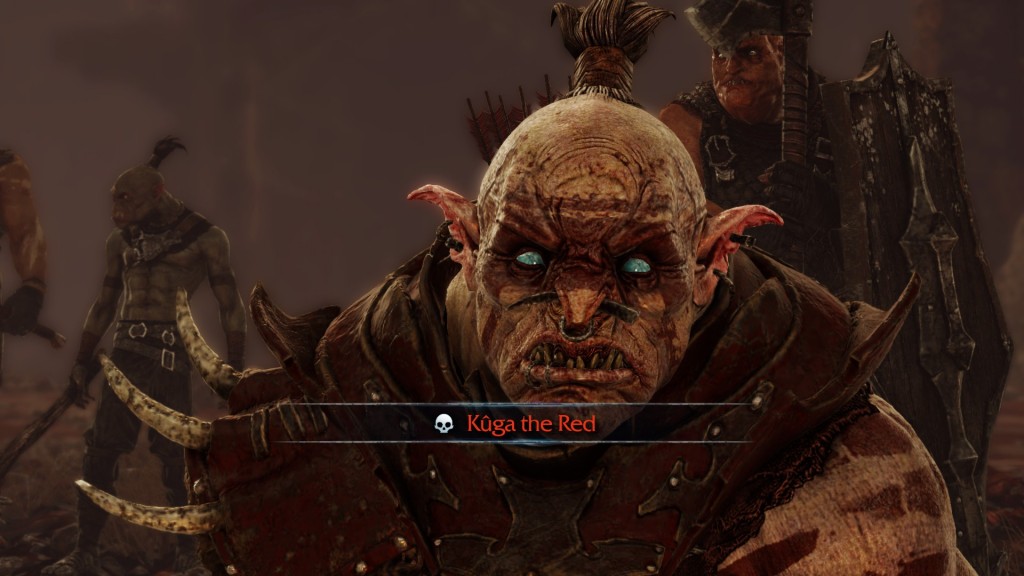 Anytime you run into a Chief, he will introduce himself in a short, boast-heavy cutscene. These are entertaining at first, but unskippable unfortunately and grow old fast, bringing the flow of combat to a complete halt. They are meant to give each Chief a unique identity, but you soon figure out that the Chiefs are randomly generated with some stock strengths and weaknesses. They all start to blend together the more of them you meet. I made the mistake of instantly throwing myself into the task of thinning out the Orc army without understanding the exact system behind it, which is explained better in the story missions. This led to me inadvertently ‘grinding’ and levelling up without progressing much. I was overpowered for most of the rest of the game because of this, making it a bit easy, but I did have more unlocked toys to play with. It may be better to do a few story missions first so that you grasp the big picture. 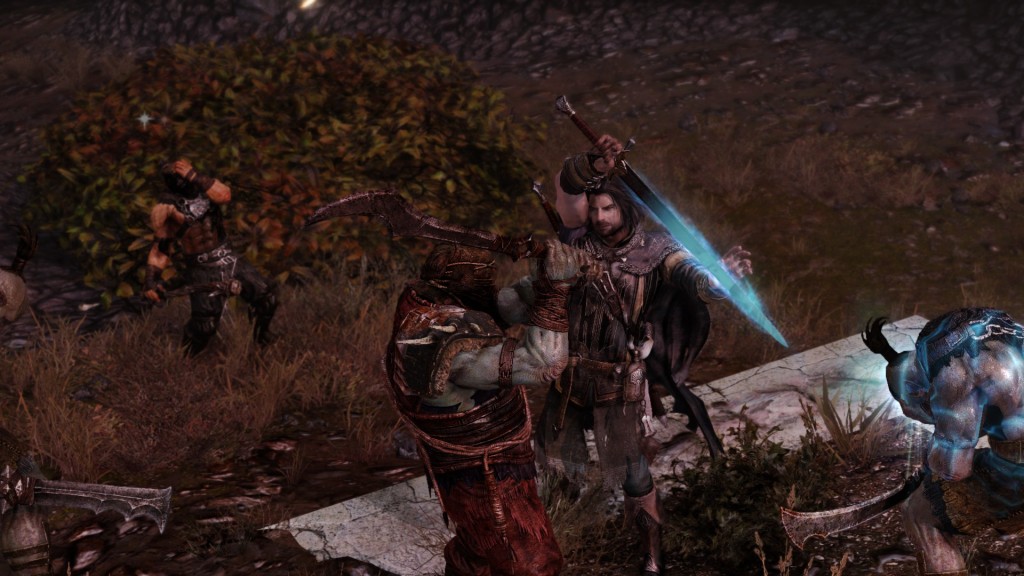 The fighting in this game is very smooth and very visceral. Disembowelments, beheadings and run-throughs are run-of-the-mill. Despite the Orcs being slavers and bad guys, the goriness does make you feel a bit sorry for them. Like in Batman: Arkham City you often find yourself in a group of enemies, having to manage the flow of combat. You will be hitting and countering while finishing off downed enemies when you get the chance. You have a sword for fighting, a dagger for stealthy killing and a bow for long-distance dispatches. Each of these can be enhanced by filling slots on the weapon with runes, be they regular or Epic (extra powerful). These get dropped randomly when you defeat a Captain. Extra-fancy moves get unlocked as you level up, but the game throws in tougher regular Orcs – who need a particular approach – to level out the difficulty a bit. 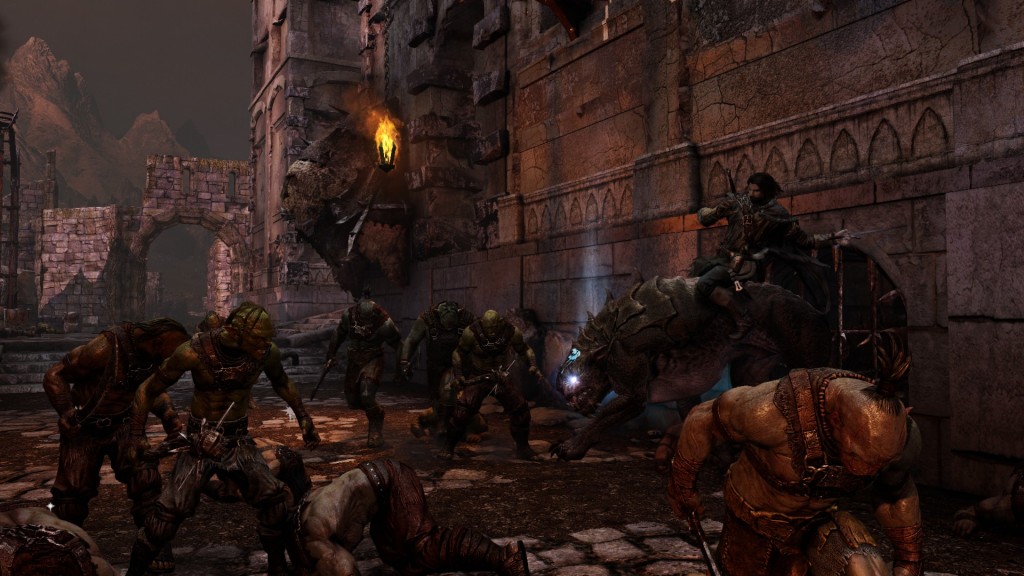 The ending of the main campaign is anti-climactic, both in terms of story and of gameplay. Just when you think you are headed into a final battle with the biggest Bad Guy of them all, you go through a few quick-time events and the story ends, sort of. It doesn’t even end properly. Instead of paying off the plot, the game decides to set up a sequel instead. I guess I would have to play through most of the game again to see how much tougher the first part of the final mission would have been without proper whittling down of enemy forces. But there is no excuse for the easy, premature ending. 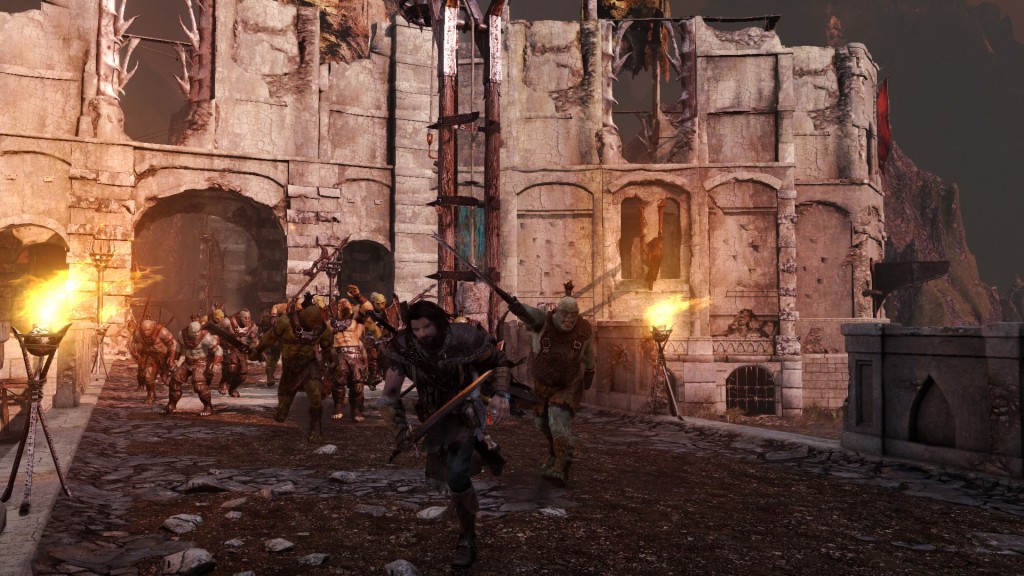 Sandbox games like this (and Grand Theft Auto and Assassin’s Creed and Saints Row) that let you loose on an open-world map, tend to overflow with optional side-missions and content. Some of these throw in a novel challenge but a lot of them start to feel like padding, repetitive and a bit pointless. For a while the perks and ability enhancing runes keep you playing just for the fun of putting your new tricks to use. But without a proper story and engaging characters to drive you forward, the whole experience does end up feeling a bit empty. Going by Steam, I am at 44% completion of the game. While I did massively enjoy myself for a long time, I can’t imagine trying to get to 100% or even 50%. Shadow of Mordor is a triumph of smooth, addictive gameplay and a failure as a story. It is clearly a story set in Middle-Earth because of some elements of the plot, but the game lacks the atmosphere of the movies, coming off more like generic fantasy. 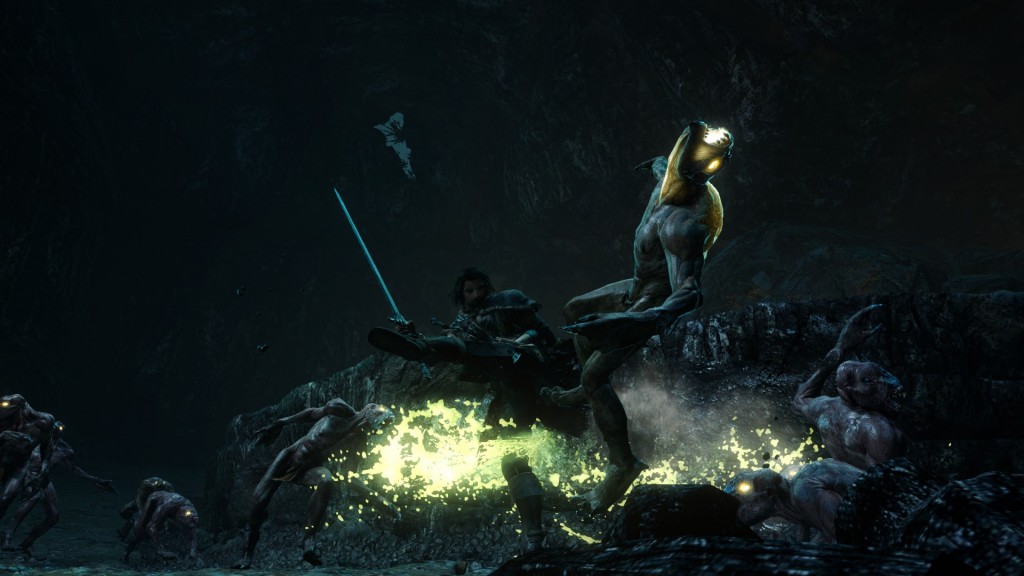 One thing I should mention is a cool feature built into the game. If switched on, you can stop the action at any time with the click of a button. Then you can pan the camera around, changing angles, depth of field, maybe apply a filter and take a screenshot. This works very well and adds a fun-factor to the game as you try to set up the best action shot you can manage. During frenetic fights, you may accidentally activate the screenshot mode, which can be good from a strategic and artistic perspective but also start to annoy. Thankfully, the mode can be switched on and off easily.

Should you play Shadow of Mordor? You’ll definitely have a lot of fun with it, but there will likely be a sequel that may marry the great gameplay to a more deserving story. 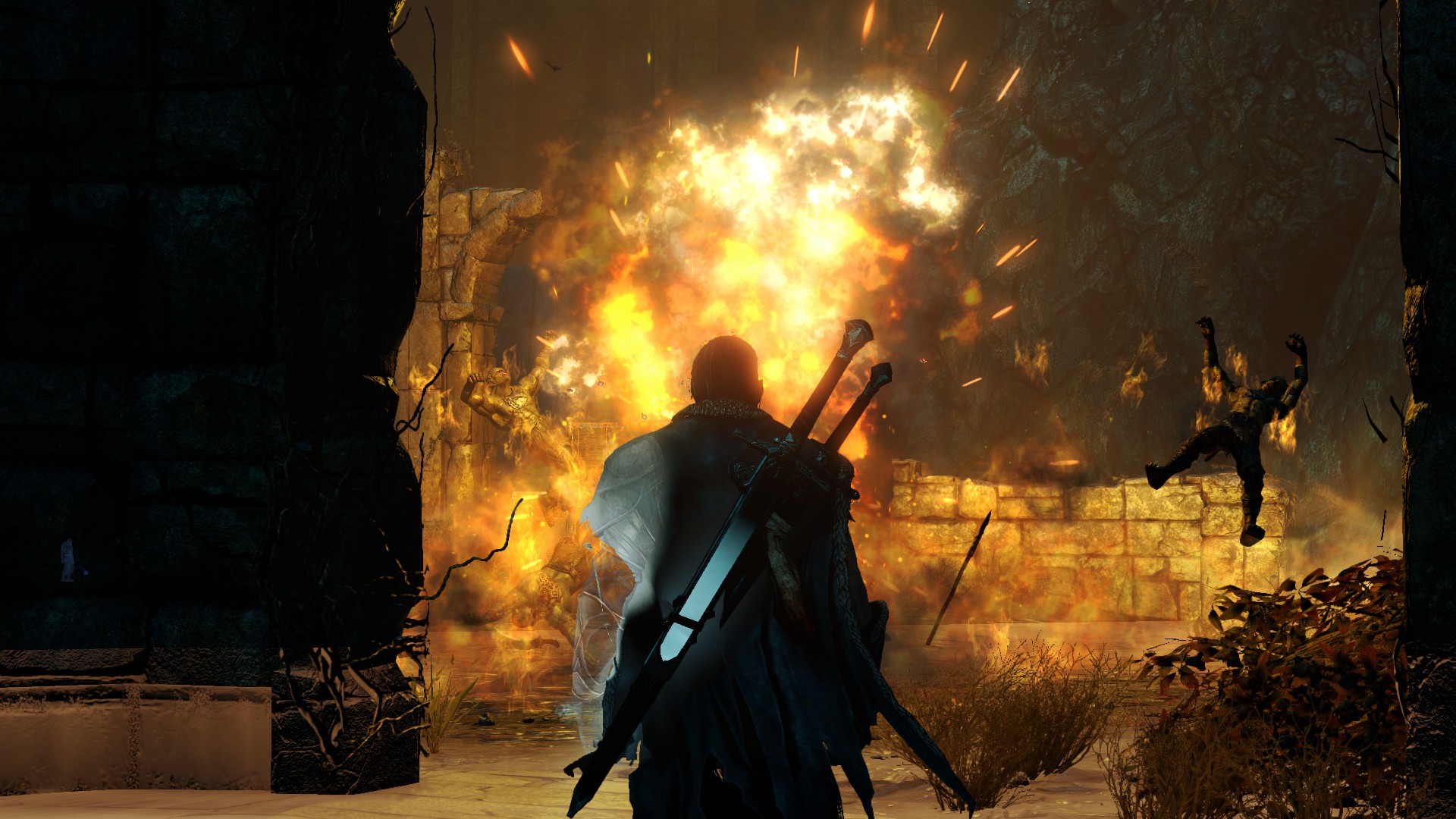