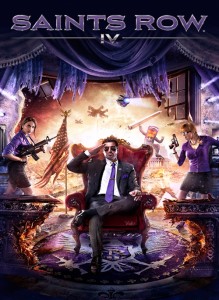 The Saints Row franchise has been detaching itself from reality more and more, putting distance between it and the (relatively speaking) more grounded Grand Theft Auto games. After the generally cray-cray Saints Row: The Third, the question was how much further Volition – the main company behind the games – was willing to push the madness. Saints Row IV provides the answer in the form of aliens, virtual reality and superpowers. After a (near?) death experience set to the tune of Aerosmith’s ‘I don’t wanna miss a thing’, you end up as president of the US of A, just as aliens invade. You get thrown into a Matrix-like city where you start a resistance movement to save the last few remnant of mankind. How you can do this while closely monitored in a simulation that is at the Alien Overlord’s control is a bit fuzzy. But never mind coherence and plotholes. (Which the game is happy to point to itself.) This smartly stoopid sandbox game is actually the most entertaining superhero simulator I’ve played so far. 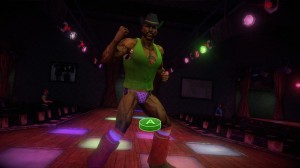 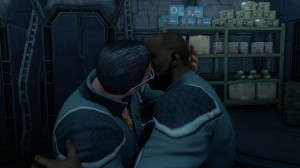 You can make a pass at all the people in the posse you put together over the course of the game – be they man, woman or droid. Nearly all will happily take you up on the offer, regardless of the gender-combination. My favorite exchange in this regard (paraphrased) is when you go “Hey, we shared so much, wanna add ‘casual sex’ to the list?” and your homie goes “Well, I normally don’t swing that way, but f*ck it, I’m down!” There is no depth or consequence to any of these interactions, but then consequences are not what the game is about. Mostly, this feature just pokes fun at the Mass Effect series, where you could romance your crewmates, with more gender limitations, but also with an actual effect on the story. 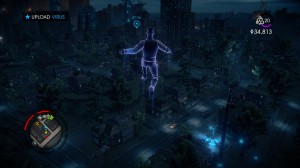 Saints Row IV is an exhilarating power fantasy – even more so than The Third. It’s not just about cathartic destruction, but also features a liberating freedom of movement. You will be running along a street at super-speed, sending cars to the left and right of you flying as you pass. You will ‘charge’ your jump as you race towards a tall building and then release the button at just the right moment to make yourself soar over it. If the building is too tall too jump over, then you just run up the side of it and jump off the top, gliding through the air to a different section of the city. I spent my first two hours of playtime just bouncing from rooftop to rooftop, collecting alluringly glowing ‘glitches’ scattered around the city, which are needed to upgrade your powers. There is something Zen-like and relaxing about it, even though you ultimately won’t want to bother collecting all 1000+ of them. The joy of simply zooming around wears off a little, but never fully goes away. I already experienced similar bounce-around collect-athons before in Prototype and Crackdown, but these were let down by the less appealing game around them. (I dropped out of both of them after a while.) 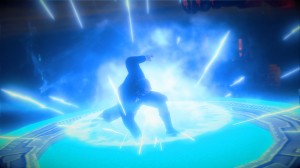 The superpowers in general are very well done. There’s telekinesis, you can send out various kinds of destructive blasts and you can punch into the ground with your first or – from the air – with your entire body, causing a variety of shockwave effects. The potential for causing mayhem is huge and you won’t have to feel morally conflicted about bystanders. Even within the videogame they aren’t real, just being part of a Matrix-like simulation you were thrown into. They’re doubly virtual. It’s just as well, as you are able to level whole cityblocks by the end of the game, if you made the effort to upgrade. I especially enjoyed the ability to set off chained explosions, which I only realised after a while was actually part of DLC I bought together with the main game (the ‘Element of Destruction Pack’). On the downside, it allows you to rip through sections of the game very quickly and without challenge. You may find yourself relying on it too much.

It’s interesting, though a bit disappointing, that the game takes your superpowers away for a lot of the main story missions, because you’d be too overpowered for them otherwise. So you’ll mostly use them within the city simulation to take over alien bases, do point-to-point races and platform your way around. 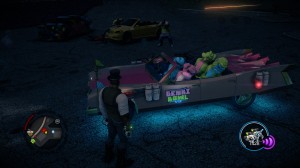 A lot of side-activities are recycled from the previous game, even if they now don’t fit all that well. Some of them wrestle you into a car to do some driving around, which feels restrictive as cars are slower than you are when running. There really doesn’t seem to be a use for cars apart from window dressing and to serve occasionally as a tool of destruction. Regardless, you can still ‘collect’ cars by driving them to a garage and upgrade them. You can also still call on homies to assist you in battle – another feature you will never need to use. But you can customize the look of these homies and upgrade them, if you want to. The superfluous stuff doesn’t detract from the experience, it just makes you wonder why it’s there.

I wouldn’t advise playing too much of the side-activities unless prompted. Most of the side-missions just have you play a selection of these activities in any case, so you will be getting an ample amount of them. And as some of them are recycled from the last game, they may feel familiar to begin with. Again taking inspiration from Mass effect 2, there are ‘loyalty missions’, to have you solidify your bond with your homies. Not completing all of these will result in a less than ideal alternate ending cutscene. 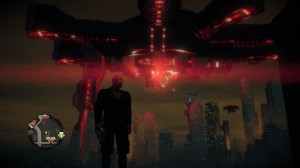 As I upgraded my graphics card between this game and its predecessor, comparing their look is tricky. But the city seemed more detailed and vibrant, full of interesting landmarks. It is mostly the same map, but feels like a wholly new experience because you’re not restricted to the roads. Sadly, the polish present in the main world is absent from the cutscenes. The lip-synching is awful at times and character animation can get a bit hokey and glitchy, especially the bits taking place on the spaceship that serves as your home base. Weirdly, your alter-ego looks better during regular gameplay. (For most of it, I made mine a dark-skinned muscleman with mutton chops, a blokey, UK voice and a Steampunk outfit.) I encountered two game-crashes when the game was switching to a cut-scene, requiring me to do part of the preceding levels again.

But apart from the actual crashes, the technical imperfections and superfluous content don’t hurt the overall experience. With its self-aware silliness, smartly stupid dialogue and plot, and a penchant for operatic destruction, Saints Row IV is an excellent way to blow off some steam after a stressful day. 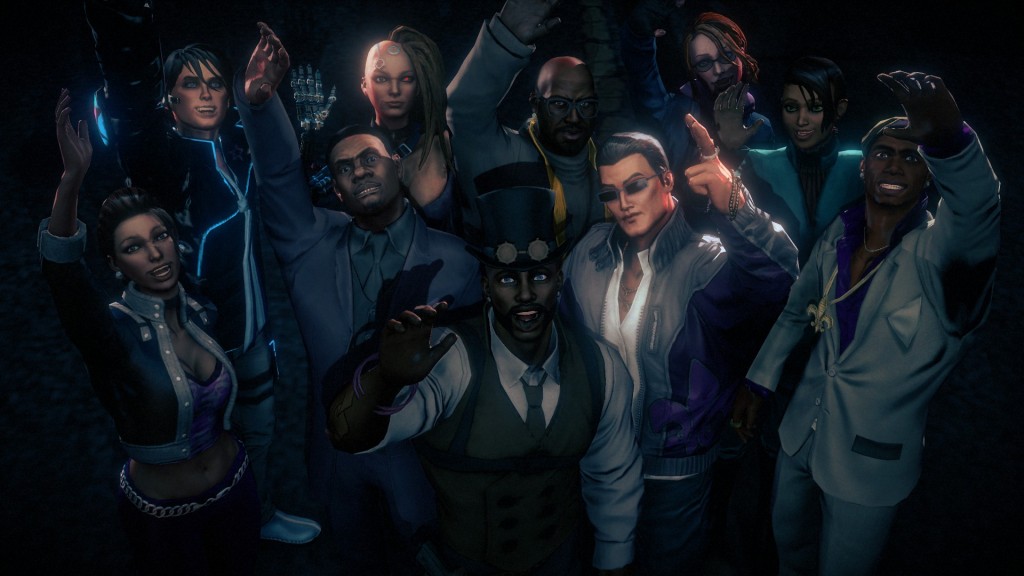 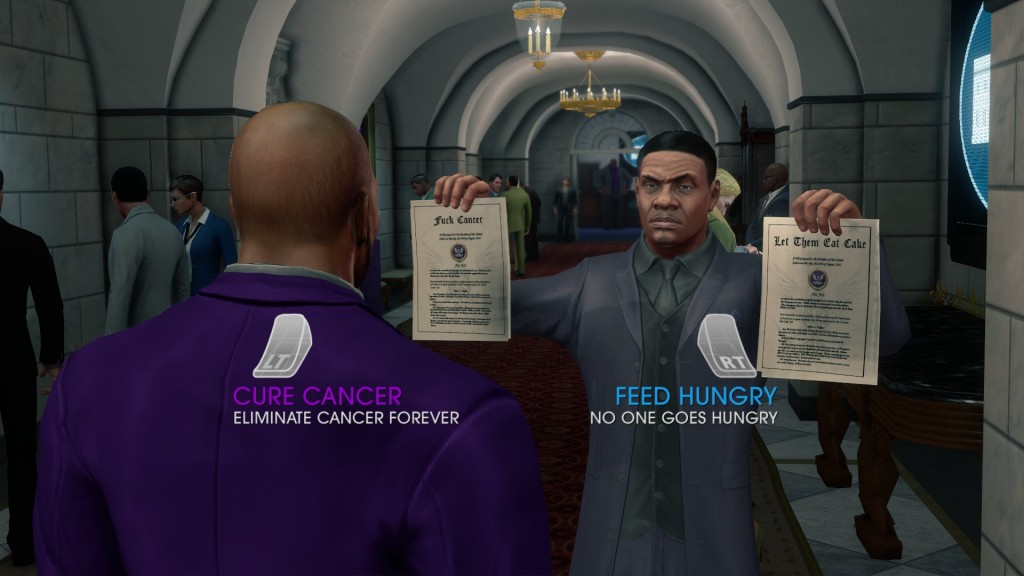