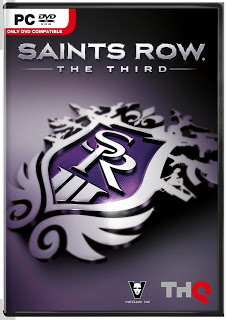 I tend to have a hard time being a bad guy in video games. Whenever there is a choice between doing something moral and something immoral I tend to go with the first, because it helps my feeling of immersion: my character is acting close to the way I imagine I would in similar, far-fetched circumstances. (Even if in reality I’m more likely to hide under the bed hoping the problem will go away.) My aspirations to Heroism and being a Good Guy hold true even if the character I’m being handed is a morally dubious anti-hero, like Niko Bellic from Grand Theft Auto IV. Though the world of GTA IV is that of a gangster movie and definitely larger than life, there still is a kind of grittiness and realism to it. Because of that, I felt bad if my car swerved and accidentally hit an innocent bystander. For the rest of the time, you were mostly killing other criminals so the violence was justified. Sort of. However, any semblance of virtual morality went straight out the window while I was playing Saints Row: The Third.

Saints Row: The Third is not surprisingly the third installment of a franchise, one which ran parallel to GTA for a while: in both series you play a gangster in a big, sprawling city that is your playground and you can engage in various criminal activities all over the place to your heart’s content. There is a storyline running through the main missions and there are optional activities that can also be played separately from the story as mini-challenges trying to beat your own initial score and to evolve your character while gaining assets. Most GTA games were somewhat serious even if they cracked more of a smile during the San Andreas and The Ballad of Gay Tony incarnations. Saints Row started out serious, got goofy in the second installment and in its third outing has cut ties with reality completely and exploded into an orgasmic celebration of absurdity. The game is crass, juvenile and a whole lot of fleeting fun. 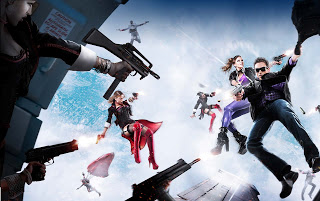 It starts at full speed with a spectacular bank heist gone wrong, then sees you skydiving through the length of a plummeting plane and have a gunfight in midair while holding a teammate who is cussing you out for being an inconsiderate asshole. It plays like a parody on action movies. The story boiled down: you want to take over the city of Steelport with your gang and are eliminating competition while fighting the authorities who are trying to take you down. Absolutely no one cares about collateral damage, be it to property or civilians. To call the main concept a story – with a proper beginning, middle and end – is actually giving it too much credit; it’s more like a series of ludicrous vignettes strung together tenuously. Consequences of plot don’t impact your free-reign activities all that much. Early on you get a penthouse for you and your homies, which is later besieged and blown up. However, it is magically restored once the mission in question ends and you can still go out on the town without getting instantly apprehended.

As if the situations you end up in aren’t silly enough as-is, the game encourages you to keep pimping your character to look as odd as possible, making the cutscenes he is placed in look even more crazy. For most of the game, my counterpart was a shirtless, black muscleman with a big dragon tattoo on his chest, runny mascara under his eyes and an odd hat. He proved he could maintain a good sprint while in high heels and carrying a rocket launcher. You can also decide on the look of your gang, making them as outlandish as you feel like. However, the design of your main sidekicks, who follow you on the story missions and feature in the cutscenes, is non-negotiable and interestingly, the game does manage to make you care about them a little bit at least among the vague suggestions of a plot. This is because the voice-acting is decent and though some of the jokes fall flat, a lot of the dialogue is at least smile-worthy. I didn’t use the ‘default’ voice offered for my alter-ego, but selected one (‘Male Voice 2’) that seemed to fit better with my look as described, so I can’t judge on the quality of the other leads. The game offers three male options, three female ones and there is even a ‘zombie’ voice option, making you simply groan unintelligibly whenever you would normally speak. Have I mentioned yet that the game doesn’t take itself seriously? Special voice acting mention goes out to the woman playing the nasally radio newscaster who always reads out a drily comical synopsis of whatever crazy event just happened. 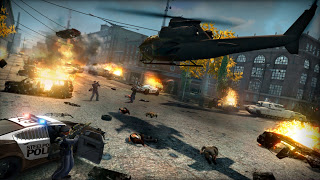 Identification with your alter-ego gets a bit complicated as he comes with a spinning moral compass. On the surface, he seems a charismatic and friendly guy who cares about and is loyal to his sidekicks. Undeniably, however, he is a drugs and arms dealing pimp and a gang leader who slaughters untold numbers of innocents in pursuit of his self-interest, without a second thought. Mass murdering psychopath just about covers it. The general populace in Steelport seems to have extremely mixed and fluid feelings about him and his gang The Saints: one moment he is a hero, the next a menace and back again. There are stores selling Saints merchandise in the game, which is likely supposed to be a cynical comment on fame. 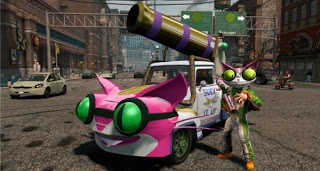 Given the overall tone and the fact that you are being handed toys to cause mayhem on a grand scale at every turn, it is nearly impossible to resist the cathartic urge to cut loose and act like a supervillain. I bought the game during a Steam sale, bundled with some extra DLC. Among other things, I was handed a bonus car that sucks up people when you bump into them and then allows you to shoot them out from a cannon mounted to the top and a gun that shoots chum, causing a shark to burst out from the ground underneath, dragging whatever victim I was aiming at down implausibly. The game is good at delivering these short-lived visceral thrills, throwing as many of them at you as it can come up with, terrified that you will get bored. And indeed, you are always veering between excitement and boredom because a lot of it seems a bit pointless. The main missions keep throwing stuff at you as a reward, adding cars, planes, weapons, outfits, allies and strongholds to your inventory and some of these can be upgraded to be even more cool, but it starts to feel like overkill. There is much more stuff than there is use for. And the mini-challenges that are left for you to take part in all across the city once the main story runs out, lack a purpose. You’ll level up your character, take over more of the city and get even more money to buy even more stuff, but for what? The pacing seems off, the game giving you a bit too much, too soon. On the other hand, if you enjoy the game as just a violent, crazy sandbox with plenty of options to act out in, without any real context, that is what the game provides pretty much from the beginning. 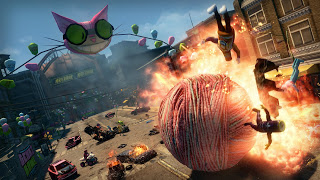 Though this caricature world of bimbo’s and himbo’s is ultimately somewhat insubstantial, I did have a great time playing around in it. The fact that I finished the main missions, unlike during my GTA experiences, is an indication of that. I kept being curious about what weird stuff they would come up with next. Because it doesn’t take itself the least bit serious, I could feel guilt-free about giving in to my more Evil and destructive side. Fans of lamely funny, politically incorrect humor, bizarre flights of fancy and incoherent action will definitely get their money’s worth. It’s a shame that the narrative – such as it is – hits a brick wall ultimately: it ends with little advance warning and plenty of dangling plot threads. Probably the intent is to wrap it up in a sequel or with DLC. (EDIT: Actually, I just realized that there is an alternate ending (SPOILERS) that does provide more closure, but requires you to make a painful sacrifice.) As for how long you’ll stick around once you’ve finished the main campaign and tried all the different types of activities once or twice – probably not that long. But Saints Row: The Third makes for a fun and imaginative walk on the wild side while it lasts. 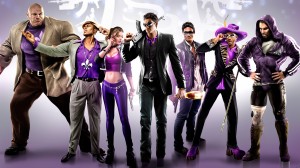