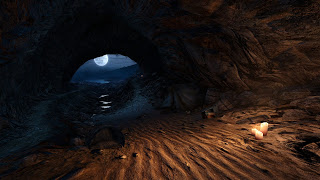 I just took a break from being Batman and running around Arkham City to cross two non-games off my to-do list. I say ‘non-games’ because each of the two in its own unique way is an interactive experience rather than a game. They don’t so much tell a story as strongly hint at one, tickling your imagination by giving you just enough elements to suggest a narrative without quite connecting the dots for you. In both cases, there is room for interpretation of how it all ties together. 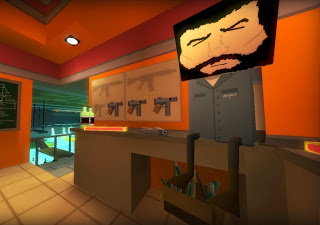 Thirty Flights of Loving – In this highly stylized short story that takes about fifteen minutes to ‘play’ from beginning to end, you’re part of a trio executing a heist. There is no dialogue, barely any text and you see everything from a first person perspective. Most interesting about this flight of fancy is the use of jump cuts. You may find yourself running down a hallway only to suddenly be in a different scene, be it one taking place earlier or later. Apart from moving around and being able to click on things to move the plot forward, you have no influence on the course of events. Thirty Flights is the sequel to the equally experimental Gravity Bone, which shares its colorful, primitive graphics but has a few more traditional gameplay elements and a great, cinematic final scene. In this earlier game, you play the part of a contract killer, but things get silly; at some point you have to take photographs of birds which afterwards explode for some unknown reason. On Steam, Gravity Bone comes packaged with Thirty Flights and there’s a text commentary option for the latter that gives insight into the making of it but does not clarify the story. ‘Playing’ both stories and reading the commentary will not take more than an hour in total and it’s certainly worth picking up for the curiosity value, assuming you find it on sale. I don’t quite get why the reviews have been so massively positive though. Granted, it’s novel to apply artsy cinematic ideas to a slightly interactive animated short story, but the end product doesn’t seem all that substantial from a story perspective. To me the ‘games’ seem to be stuck in a weird and slightly uncomfortable Limbo between a game and a short film. 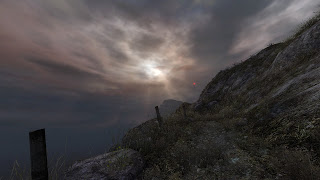 Dear Esther – Dear Esther tells its ambiguous story in a totally different way. You don’t click or interact with anything or anyone, you just observe as you move around the stunningly detailed landscape (or possibly mindscape) around you. The abandoned island you find yourself on, contains strange sights for you to see as you follow a long, winding way to a beacon blinking on the horizon. There are signs painted with luminous paint, lit candles in unlikely places and stranded boats of the wooden as well as the paper variety. A voice joins you now and then on your walk, dropping pieces of a sad and spooky story that must somehow be related to the island and its strangeness. The connection gets clearer as you go, but never completely solidifies. Apart from the voice, there are only ambient sounds and the occasional piece of piano, violin or choral music to break the silence. The sky is grey, overcast, with a ray of light in the distance. There’s a beautiful sadness to it all. The path you walk is very linear, the environment laid out in such a way that you can make a small extra detour, but never wander off in an unintended direction. There is no running, you move at a slow but steady pace. Those short on patience need not apply. Dear Esther only works if you give in to the mood of the piece: put on headphones, turn off the lights and preferably have a large, high-resolution monitor. Don’t expect action, more a meditation with hints of story. This meditation will take about 75 minutes to complete.

As you see: despite both being an experiment in storytelling, we have an apple and an orange here. I enjoyed Dear Esther more, because of the atmosphere. It’s funny that simply the act of moving yourself through the environment makes it a compelling experience, when the minor adjustment of watching the game as a movie would likely make you fall asleep by the midway point. Important note: the save system was messed up. If you don’t complete the story in its entirety at first, you may only be able to start at the beginning instead of at one of the other three chapters. Thankfully, there’s a work-around for this.

Anyway – I am off to be Batman again. As one does. 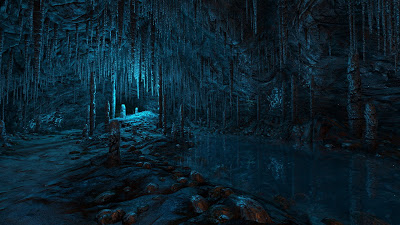