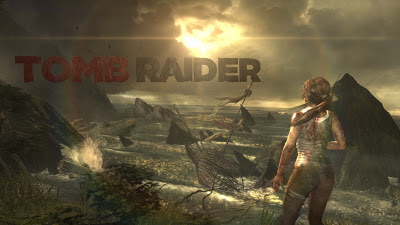 Lara Croft is an ambivalent creation, like most female characters in video games. She is empowered and doesn’t need a man to come to her rescue, but she has also been designed to please hormonally bothered teenage boys. Traditionally, she had a tiny waist and sported considerable cleavage. And though she went about kicking ass, there were flashes of what seemed to be misogyny in the elaborate death scenes that would occur when a button prompt was missed or a jump went wrong. There are even gleeful collections of Lara’s death scenes on YouTube.

The new Tomb Raider game, supposedly a reboot of the franchise, downsizes Lara’s bra and gives her a more believable appearance, even though she is still very, very pretty. The odd mix of girl power and gruesome failure is maintained. Like Lara Croft herself, this new game was created based on two separate approaches. There is the storytelling aspect and there is the gameplay. The story introduces us to a younger Lara Croft than the previous games, but it seems to take place in the present-time. Her back-story is unchanged in so far as it is discussed: adventuring parents gone, silver spoon present. Within a few cut-scenes she finds herself stranded on an island with some violent factions and hints of a Lost-like mystery. From just trying to survive, she goes through challenge after challenge until she grows from a hapless victim into a pro-active predator. At least, that is the story the cut-scenes tell us. The gameplay didn’t quite get the memo.

It’s not much of a spoiler that Lara gets hurts badly very early on, getting impaled on an iron bar that runs through her side. This would put most people out of commission for a while, if not for good, but the pain is forgotten. It takes Lara longer to walk it off than the average action hero, but the game takes place over the course of a day or two and she takes so much abuse that her being mobile, alive even, beggars belief. Despite all her wounds, she pretty soon learns to fling herself at walls with an axe and climb her way up them without wear or tear, among other amazing feats. She also turns out to be a really good shot with a bow (or a gun) even at long distance, right from the start.

Not only does she have the constitution of The Terminator, which undercuts the semblance of realism, her psychological journey also doesn’t come across so well in the gameplay. Much is made of the first time Lara kills a man, even though he really had it coming. She agonizes about this and her next couple of kills in a cut-scene and a few lines of dialogue. Then she proceeds to rack up a body-count throughout the game that most serial-killers would be envious of. It doesn’t help that, as a player, the kills are actually fun, because you are given a lot of options to get creative with it. It distances you from the character you’re supposed to be.

That’s not to say this isn’t a great game. The story and gameplay don’t mesh very well, but are a lot of fun when compartmentalized. The gameplay is varied and polished and there’s an interesting mix of exploring beautiful and varied environments, mild puzzling and action. (Though I would have preferred a bit less action and some more complex puzzles, like those featured in the last two Tomb Raider games.) There are the usual collectibles strewn about, which help you upgrade your equipment, gain experience points to level up or give back-story on the island and its inhabitants. The places they’re in often make no sense contextually, but they’re fun to track down.

I’ve never played any of the Uncharted games, but allegedly this Tomb Raider incarnation has taken more than a few pages from its book. It’s a roller coaster ride of an adventure, but it manages to retain the familiar Tomb Raider flavor, even if it is a bit low on raiding actual tombs. (And most of the tombs here are small and optional.) There is an ancient civilization featuring mysticism that may very well be factual, there are gory deaths and there are personal losses, which are also a staple of the franchise. Quite why Lara has a taste for more when it is all over, is not clear. But unless the entire next game is about her going through a severe case of post-traumatic stress disorder, maybe the franchise is better off dropping the pretense of realism.

PS: I haven’t bothered with the multiplayer, which I’ve heard is okay. For me, the Tomb Raider franchise was and is (despite the current emphasis on action) mostly appealing because of the sense of isolation and wonder that comes from wandering alone through overgrown tombs with clues about ancient societies all around. And, of course, it appealed because of her giant rack. Phwoar! Am I right, guys!?