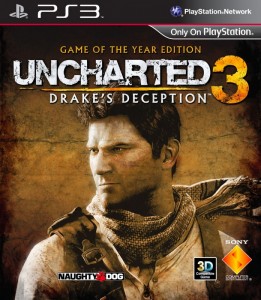 Nathan Drake has a flair for the dramatic. If he enters a mode of transport, you can bet it will soon be crashing, burning, exploding, sinking or any of those combined. You do not want to commute with this guy. He also is good at setting off events he caused seemingly by just being around. If he’s running around a floating base of operations, you can be sure a tidal wave will strike and rip it apart and if he enters an ancient, presumed-mythical city, odds are against it still standing by the time he leaves even if he didn’t do anything directly relating to its destruction.

Unlike Lara Croft, who has some presumptions of being an archeologist despite breaking every ancient vase she comes across, Drake is just an adventurer. He is in it to uncover his family history and to make money, though something always seems to go wrong when it comes to the latter. Refreshingly, this time his companions start to question his motives as he puts himself and his friends in mortal danger. Is getting bruised, beaten up and shot over and over again really worth it, just for a chance of uncovering some ancient history? 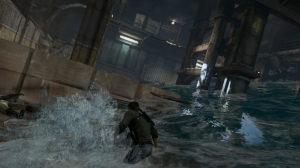 Uncharted 3 – Drake’s Deception looks great and plays like a smooth rollercoaster ride, juggling platforming, puzzles and shooting. There isn’t really a lot to add here that I didn’t already say in my review of Uncharted 2, as the games are very similar. Again, there is a bit too much shooting for my taste even if the level design keeps giving it a new spin throughout. There were a few moments when the story ground to a halt because of a long-winded shooting gallery section. But the climatic boss fight is a lot less drawn-out and irritating this time around and the story is okay. I finally found myself liking and rooting for most of the characters, even if Nathan Drake himself is still a bit too cocky and self-centered. The voice-acting is good, apart from the fake laugh in people’s voices whenever their companion says something vaguely funny. It comes across as ‘Aw-shucks! Oh, you scamp!’ 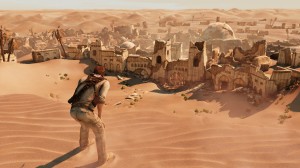 The game does make me ponder the narrative potential of games. It is very linear and comes close to being an interactive action movie, but as far as the story and characters go, it’s pretty simple stuff. Less linear games like Dragon Age and Mass Effect do a much better job of being both a game and a meaty story. Because it sticks so close to a movie format, the interactive bits and the story bits seem to get in each other’s way. You have no influence on the course the tale takes and most of the parts where you’re in control are just busywork from a plot perspective. I’m not convinced that the future of games lies in aping the movie format. But still, the Uncharted series skillfully serves the same purpose as a big, dumb action movie: to keep you zoned out on your couch, consistently entertained. 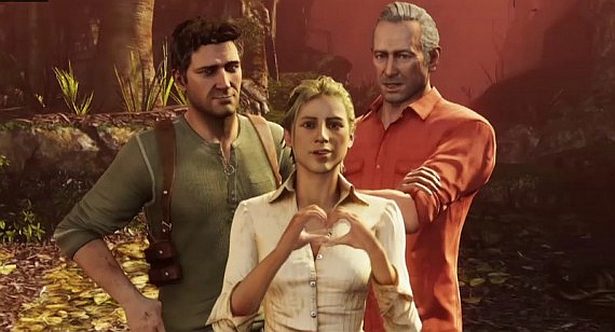