I enjoy a good story. Even in my video games, though a game is not the best medium for a carefully crafted tale. It’s helpful if you actually care about the characters, your alter-ego especially, and are curious about what will happen next. It gives what you an – admittedly false – sense of purpose. It is rare that gameplay is so good that you could not care less about the narrative framework. Which brings me to Vanquish.

You are Sam Gideon, a smoking smart-ass in a high-tech suit. Some evil person microwaved San Francisco with a space-gizmo – this is shown in a surprisingly gory opening scene – and you have to stop him from doing it again to a different city. Your nemesis is a slightly effeminate space-Russian. It’s as if – in 2010 – Platinum Games already knew that the Russians would be causing trouble again. Although making him at least gay-adjacent is an ironic touch, considering the country’s general asshat attitude on that front. 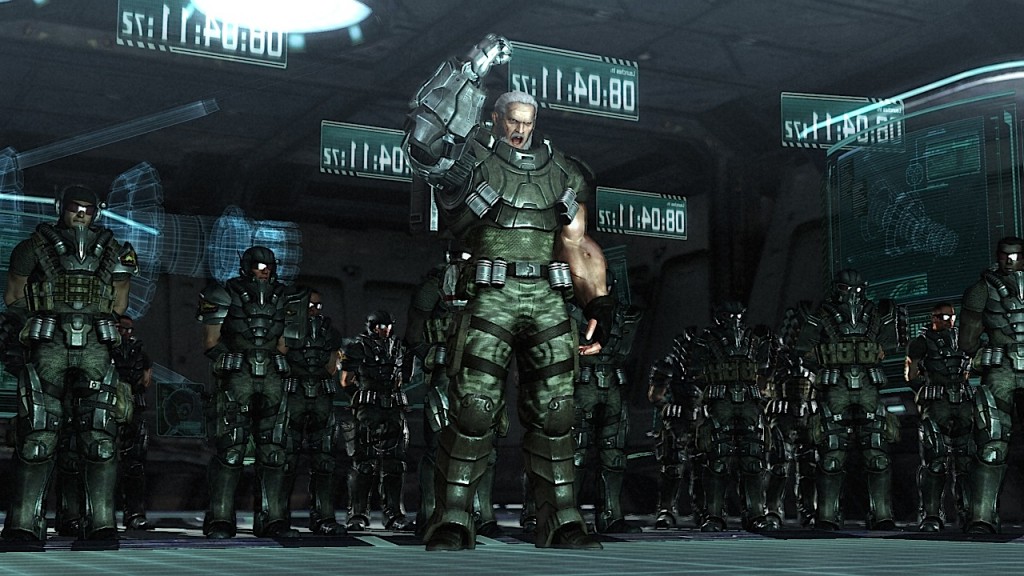 You get plopped aboard a giant space-station with a squad of rugged marines who are given names but not personalities. They fight alongside you (though they do not make much of a difference) and will die if you don’t revive them when they are wounded. They are not gone permanently though, your squad never really thinning out. The only thing you will lose if you ignore them completely is that you won’t get the ammunition that pops out of them when you heal them. (Because why not.) The leader of this pack is gruffer and more rugged than all the others. Your annoying alter-ego and him build up some begrudging respect as they slaughter their way through hordes of evil robots. The only other character of note is a woman providing tech support from a safe distance. She ends up being a love interest for Sam, if I interpreted things correctly. The writers are not entirely clear on this. 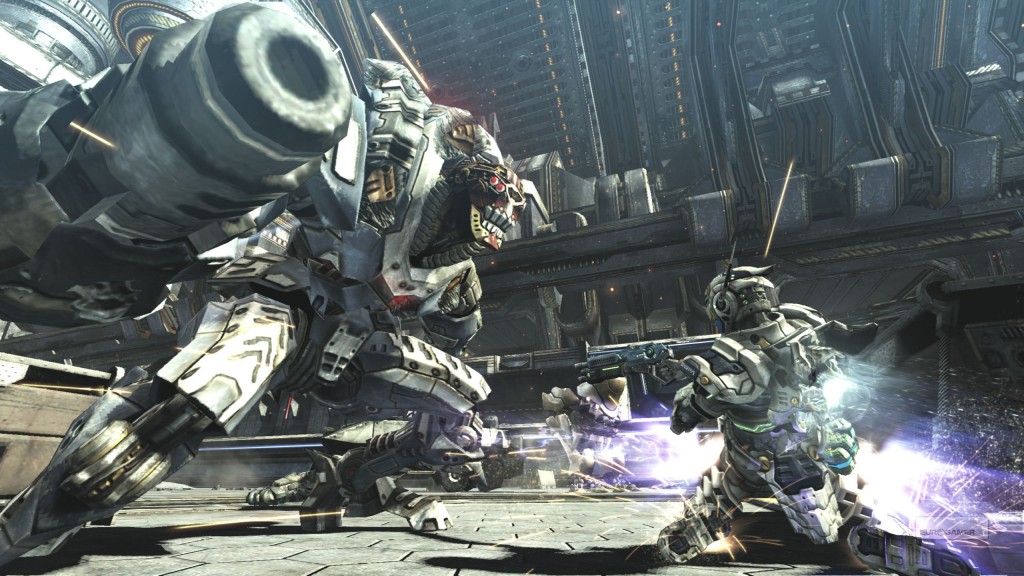 Though Vanquish‘s script seems to be going for self-conscious spoofery, it is seriously tone-deaf about comedy. The story is cobbled together from other, at least marginally better scifi-stories, and the tale takes a turn for the incoherent near the end. A major plot point is a character changing allegiance for no discernable reason. The cornball dialogues are charmless and on the nose, if not vaguely bizarre. It’s like the writers played a game of telephone with lines from famous action movies, but without a sense of context or an understanding of what made these lines work to begin with.

To be fair, I did have a few genuine laughs during the game. There are little statues of – I think – the lead game designer for you to ‘collect’ by shooting at them. It will make the statues bounce around like they’re on a bungee cord, have them turn an angry red and make them squeal at you. At one point, you walk in on a few of the robots you would normally fight, gathered around a big boombox, some of them applauding and cheering on two others who are getting their boogie on. Then there is a recurring monster that you have to battle, which has a silly streak. It consists of a heap of scrap swirling around a red dot, which is both the point of origin for a deadly laser and the monster’s weak spot. If damaged enough, the heap will fall apart and the red dot will scurry around the floor on two spindly little legs for a moment, the scrap trailing behind it like the train of a wedding dress. Oh, and the end credits have you shoot down meteors showing the faces of members of the development team. 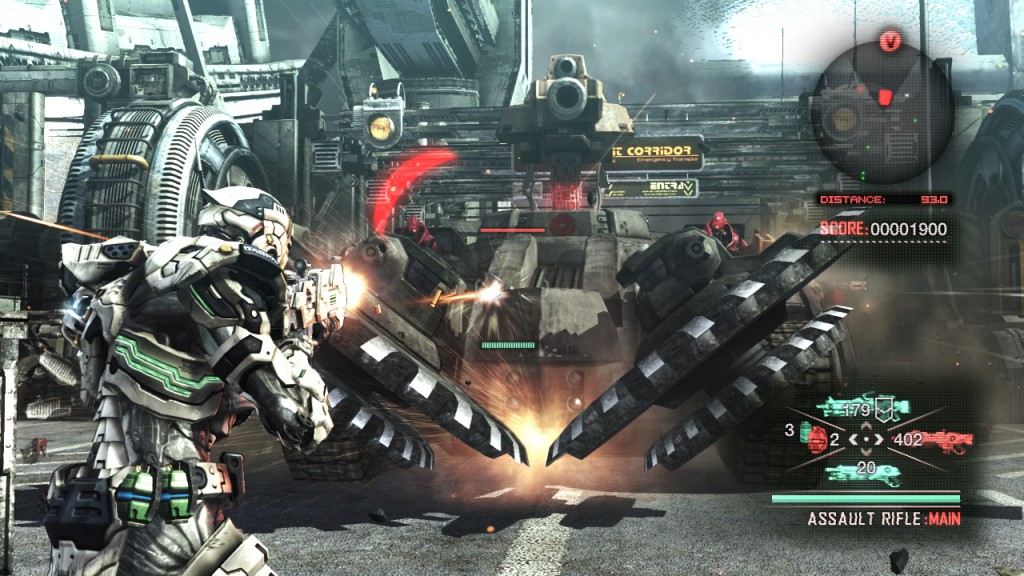 But now we get to what truly redeems Vanquish: the gameplay. What the plot and characters lack in fun, the smooth rollercoaster ride of actually playing the game more than makes up for. Apart from an armory that is effective and versatile if not huge, you have two special moves at your disposal. One slows down time, allowing you to line up shots and do serious damage while your surroundings look all but frozen. Not especially original, frequently copied since Max Payne did it in 2001, but it still feels great. The other move is the ability to zoom along the ground really fast, courtesy of rockets attached to your knees. This, as far as I know, is pretty much a first. You can do only one move at a time and only for a short while before your suit needs to recharge. Once you get the hang of the controls, battles start to feel like a tactical ballet, with constant, fluid shifts in tempo. Manoeuvering yourself around the battlefield at great speed, taking out some enemies in slow-motion and then quickly sliding into cover, never gets old. The framerate is solid and glitches are very rare. This game plays smoother than James Bond sipping a martini.

The level design and the enemies are not entirely original. The levels have a nice bit of variation to them, but for the most part consist of a variety of shooting arena’s strung together. There are – of course – waist-high walls to take cover behind everywhere. And there are chests with guns scattered about improbably. When their quantity increases, this is a sure sign that a big fight is about to happen. It’s a blend of Gears of War, Halo and possibly Mass Effect. What is fairly original, is the way in which you level up your weapons. If you are carrying one and find new ammo for it while your ammo is already at maximum, the gun will get a nice, permanent perk instead. It’s an efficient, quick and rewarding system. 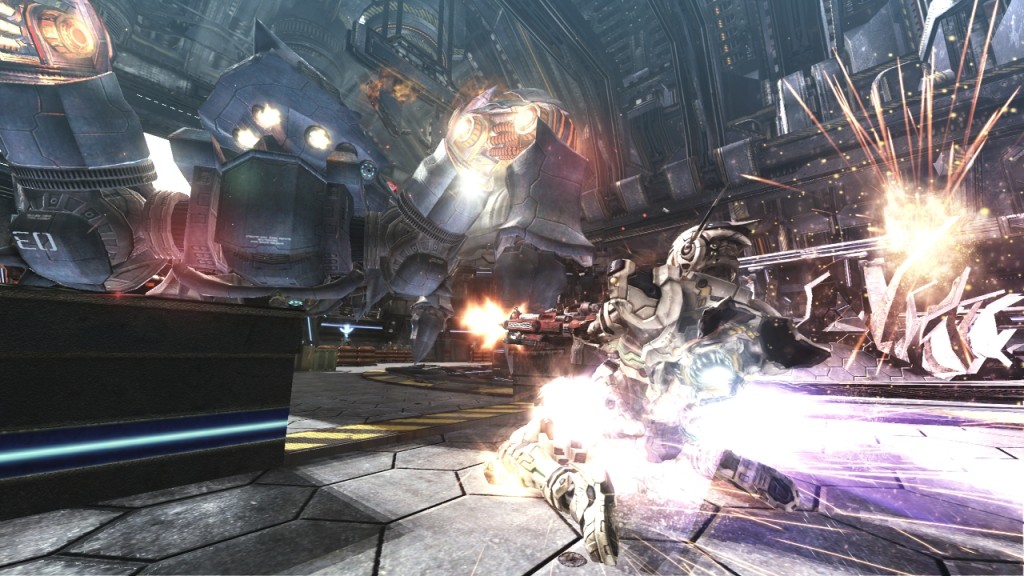 There are a few Boss fights thrown in that show the game’s Japanese origins. They will always signal where you are supposed to shoot them by having a big, red spot somewhere and if something is glowing yellow, this is a weak spot that can be exploited. The first Boss I encountered felt like a slog, but once I figured out the logic behind the bosses, they became pretty easy to dispatch.

The game didn’t do so well when it came out, despite very positive reviews. Rumours of a sequel linger online, but then they always do. As it stands, Vanquish is short and sweet, an overlooked gem. With absolutely terrible writing.