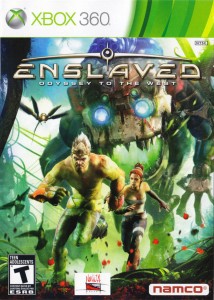 Oops, it happened again. About three-quarters of the way through a game I was really enjoying, there was a difficulty spike and I got stuck. Not the kind of stuck where an online walkthrough would help, the kind of stuck that would require dexterity and a very quick trigger-finger or failing that: lots and lots of time and some dumb luck. I tried until irritation and frustration throttled the life out of my enthusiasm and interest, then I took the game out of my X-Box 360 and shoved it among other games mentally tagged as ‘maybe I’ll try it again someday… but probably not’.

The game in question: Enslaved – Odyssey to the West. I picked it up on the basis of good reviews which praised the engaging story, genuinely likeable characters and great graphics, while lamenting the just-average gameplay. And I was really enjoying the experience, right up to the point where I ended up wanting to pitch my controller through my flat screen television. Unfortunately, the same thing has happened to me before, most recently with Batman: Arkham Asylum, where a fight threw one too many waves of mindless minions at me for me to push through.

Of course, it is hard to set a proper, slowly climbing difficulty curve for a game, since you are dealing with a wide variety of players and not everyone is equally skilled. (For instance: I am aware that I am relatively weak when it comes to fighting games.) You are also trying to please people with a range of different mindsets. There are the hardcore gamers who thrive on exploring every inch of a game, replaying the entire thing on the hardest difficulty setting, collecting achievements and extra’s to impress themselves and their equally hardcore friends. These are presumably people with more time than money to spend on new games. On the other hand, I – as a 35 year old gamer working fulltime – have more money to spend than time. I couldn’t care less about impressing anyone when I am gaming and I avoid getting riled up and competitive with complete strangers online. For me, gaming is also about being challenged – sure – but primarily about relaxation, entertainment and immersing myself into an interesting story, with ditto characters and environments and about experiencing novel and diverse gameplay. I prefer a great, short game to a good, long game and I don’t think I am the only thirty-something with this approach to gaming.

The one thing I hate to waste is time. By which I mean: spending it doing something I don’t enjoy. Like replaying a level of a game (or a part of it at least) over and over again. This is why I avoid games I am interested in purely on the basis of reviews mentioning a badly handled ‘save’ system. The kind that forces you to replay a lot or increases the chances of you getting stuck somewhere. I remember the enjoyable Buffy – The Vampire Slayer game for the original X-Box having a tricky series of instant-death jumps too far away from a save point. 90% into the game, my patience ultimately caved and I buried Buffy in a digital graveyard. The world did not get saved. It’s really a shame because something like this retroactively sucks a lot of the joy out of the parts of the game you DID get to enjoy. The story, the adventure feels unfinished. I’ll likely end up passively watching some of the later cutscenes from Enslaved on YouTube instead of experiencing the whole game and recommending it to friends.

Recent games have gotten better at setting up forgiving save systems and now it is time for more game developers to do the same with difficulty levels. It is fairly stupid that you have to select the difficulty level before starting up a game, when you have no idea what the benchmark is. Starting with ‘easy’ would make me feel like an infant and I have beaten plenty of games on ‘normal’ so that is what I tend to go with. However, if a game is deceptively easy at first, only to slam you into a brick wall when the end is in sight, you may be well and truly screwed. Some games like Batman: Arkham Asylum and Enslaved leave you just one option: restart from the beginning at a lower difficulty level. What should be standard is a system like the one employed by – for instance – Dragon Age: Origins: when I ran into a frustrating boss, I simply lowered the bar to ‘easy’ to make it past, then raised it to ‘normal’ again. Did it hurt my pride to do that? Not really. I am an adult: I weighed fun against frustration and made a rational decision on how to spend my time. Did it allow me to enjoy the rest of the journey? Yup, and that’s what matters. Give away all the achievements you want to hardcore gamers for going through the entire game without fiddling with the difficulty level, I just want to enjoy the ride and see how it all ends. As of now, I will be checking to see if a game that seems of interest has the option to fiddle. If It does not, it doesn’t get my money: no more dead ends for me. Life’s too sho 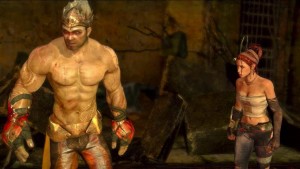