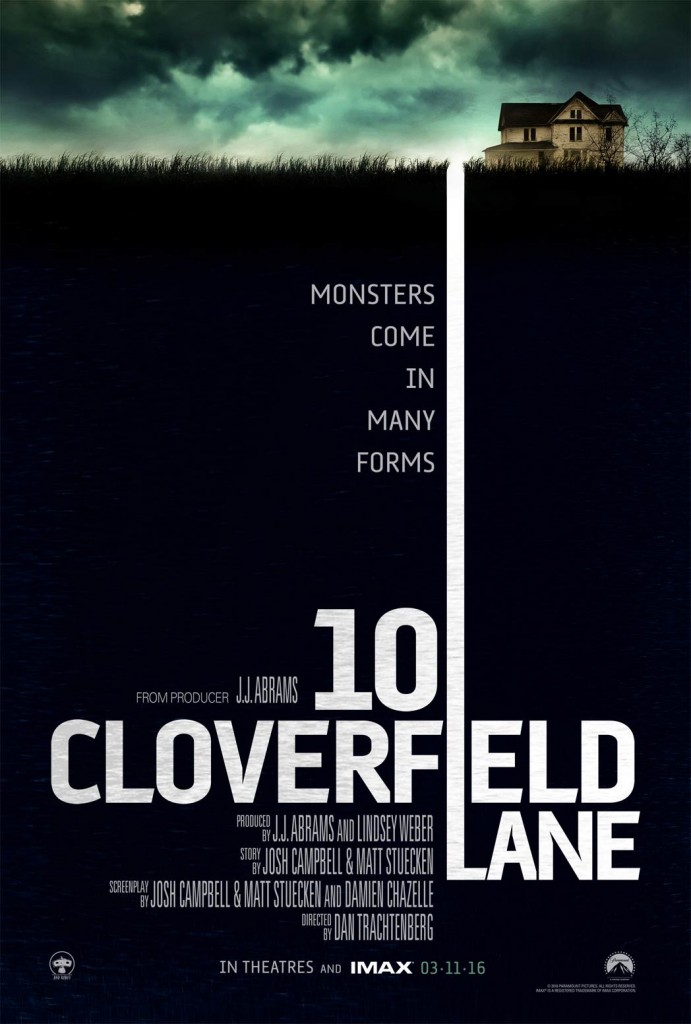 10 Cloverfield Lane is a movie best seen knowing as little as possible about it beforehand. That makes it hard to review. I saw the trailer, which was very well made and misleading in a good way, but it contained shots that I had remembered and knew would be coming up at some point. As I was watching the film proper, this allowed me to guess where things were headed. I still loved the movie, but I wonder if going in completely blank would have made it feel even more suspenseful.

I’ll just say this – the film starts with a woman named Michelle (Mary Elizabeth Winstead) hitting the road after a fight with her fiancee. She ends up in a car accident, which knocks her out, and comes to in a basement. There she meets Howard (John Goodman) and Emmet (John Gallagher Jr.). Things get tense quick as Michelle tries to figure out – together with the viewers – what exactly is going on. The viewers have an extra clue that Michelle does not have, which is the title of the movie. Though you may wonder if it is a misdirect, which I will neither confirm nor deny. To jog your memory: Cloverfield was the monster movie from eight years ago that followed a group of friends as they tried to flee a besieged New York. The point of view was a camera that they were running around with, leading to much motion sickness and furtive glances at a variety of creatures.

10 Cloverfield Lane is a more psychological beast but no less gratifying, with convincing performances by the three leads. Michelle is a heroine to root for, relatable, vulnerable and smart in a believable combination. The story deals out a nice amount of twists, though as is often the case with twisty tales, things end up feeling a little convoluted. When you walk out of the theater, elated by the surprisingly satisfying ending, don’t look back and try to dissect it all. Go in blind, enjoy the skillfully paced rollercoaster and get on with your day.