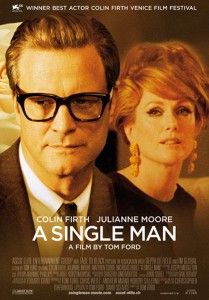 Based on the novel of the same name by Christopher Isherwood, A Single Man tells the story of George (played by Colin Firth), an English teacher in Los Angeles during the sixties. He recently – suddenly – lost his long-term boyfriend and has a hard time coping. Most of the movie takes place over the course of one day. We follow the professor as he makes ominous preparations, hangs out with his lonely and tipsy friend Charley (Julianne Moore) and gets flirted with by Kenny (Nicholas Hoult), one of his students.

Tom Ford’s directorial debut is not intended to be a downer. Carpe Diem (‘Live in the now.’) is what we’re supposed to take away from the film, going by a behind-the-scenes documentary included on the BluRay edition. A Single Man shows how death can make life stand out in sharp contrast. It can feel unbearably bright, harsh and overwhelming. But being confronted with death can also lead to a new appreciation for everything you experience. Senses dulled by being on automatic pilot are suddenly thrown out of their routine and become more engaged. There is a heightened perception and an attention to detail.

George lives in an amazing, tidy, stylish, well-organized house and he dresses with care. You can tell that the kind of man who would live like this is also the kind of man behind the camera. Tom Ford’s meticulousness shows in every carefully framed shot. Well-groomed, well-dressed George gets told twice that he doesn’t look so good, which for regular, less put together people like me, seems to raise the bar for ‘looking good’ very high. Let’s not forget, George looks like Colin Firth and Colin Firth has a hard time not looking good under any circumstances. Just ask Bridget Jones.

There is a last-minute twist that seems a bit artictifical but necessary, as heading right for the ending that was foreshadowed would have lacked bite. If you could level any criticism at A Single Man, it is that it feels restrained, a bit arch. This is in keeping with George’s personality, but if you’re not in the right frame of mind for it, you may grow restless. If you’re inclined to relax into the melancholic, yet life-affirming mood of the film, you’ll have a memorable experience.