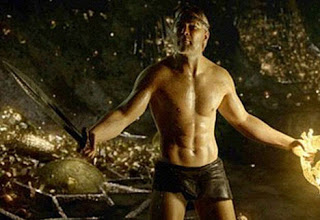 Gosh, does Beowulf ever love the sound of his own name. If a drinking game was based on this movie – a sip for every time the name is mentioned – it would end in first aid with a case of alcohol poisoning. Beowulf’s crew could probably handle it though, as they are big on booze and women. They respond to a summons by Danish King Hrothgar who is plagued by a monster called Grendel and is offering gold as an incentive to whoever can rid him of it. This monster makes an impressive appearance early in the movie. Looking like an oversized Gollum after an acid shower, he shows up at the town hall during festivities, rips people apart and generally raises heck. He also speaks in an old Danish /Germanic (?) tongue, a nice nod to the origin of the tale. The rest – of course – speak current day English. A certain newcomer named ‘Jesus’ is mentioned a couple of times, as an alternative to the Nordic gods, nicely anchoring events in history.

At one point, we hear Beowulf telling of his own accomplishments, as we see a slightly different version of events and his crew is commenting on how the story is getting inflated with each telling. I am not sure if there are also different versions of the Beowulf legend – there have been previous films in any case – but director Robert Zemeckis is no slouch at spinning a yarn and tells his one with style. The movie feels adult, with just enough action scenes and small humorous touches too keep it from getting too dour.

The same motion-capture technique is used here that he used for the sweet and fluffy The Polar Express: actors are filmed first and then animated over by computer. Some of these actors are like photocopies of their real counterpart. Anthony Hopkins and Angelina Jolie look like the real deal. Others, like Crispin Glover as Grendel, are unrecognisable. The virtual cinematography is beautiful, as is the animation, though they still haven’t quite got the eyes right. The faces are very detailed and expressive, but there is something vacant about the characters sometimes. And smooth skin seems hard to reproduce without calling plastic to mind.

Speaking of skin, there is an interesting scene where Beowulf decides it would only be fair to fight Grendel hand-to-hand without the aid of weapons. And in the nude, for reasons that I must have missed. So we get a big, bloody fight in the town hall – containing a really gross decapitation by mouth – during which Beowulf is running and jumping around in the nude while mayhem rules around him. Miraculously, the camera angles and diverse objects keep covering up his genitals, much the same as in a scene from Austin Powers. It did draw some giggles from the showing I was at and was a little distracting. But even though there is no full frontal, the women and gay men in the audience will at least enjoy a digital butt and body well worth drooling at. I am not sure which ancient Danish gym Beowulf went to, but I want to sign up there!