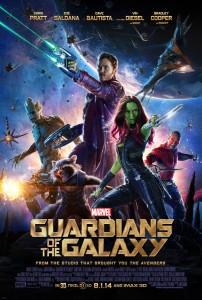 Guardians of the Galaxy has just raised the stakes. Not so much for the next Avengers movie or for the other Marvel comic book movies it loosely ties into, but for the upcoming Star Wars sequels. This is how intergalactic high-adventure should be done. A taste for the outlandish, a sense of humour throughout, but just about serious enough to allow for emotional investment in the characters, refreshingly odd as they are.

Picking a group of Marvel characters that even a lot of avid comic book readers are not familiar with, was a smart thing to do. Most viewers will come to them fresh. There is the earthling Peter Quill who would love to be known as Star-Lord, but isn’t (Parks and Recreation‘s Chris Pratt). There is greenskinned fighter Gamora (Zoe Saldana, formerly blue in Avatar). There is a tattooed beefcake Drax, nicknamed The Destroyer by some people (WWF fighter Dave Bautista). And finally there are a bioengineered raccoon called Rocket (voiced by Bradley Cooper) and a walking tree, apparently called Groot (voiced by Vin Diesel, who must have had trouble remembering his lines). Rest assured that every single one of them has a complicated, troubled past and an attitude problem. Well, maybe not Groot. He seems Zen for the most part, although he gleefully does something very violent towards the end of the movie, so who knows what bubbles beneath the wooden surface. 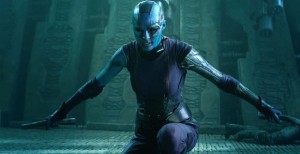 Given that I am relatively unfamiliar with Marvel’s universe outside of the earthbound part of it, I am not sure how much of the specifics were thought up for this movie and how much was borrowed from the comics. There are odd alien races and there is technology that seems to somewhat make SciFi sense even if the workings of it are not explained (and probably couldn’t be). And there is a major McGuffin at the center of it all that will come to play a major part in upcoming Marvel movies. (If The Infinity Gauntlet means anything to you, feel free to get excited now.) 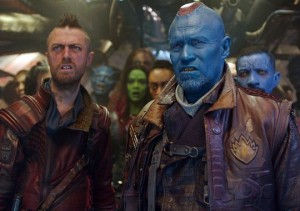 Guardians of the Galaxy has a lot of good parts coming together to make it a great whole. That the special effects are impressive is to be expected considering the budget for the movie. The actors are also game, not afraid to get goofy and go over the top when the script calls for it. And that script (credited to Guardian‘s director James Gunn and to Nicole Perlman) is likely the key component here. It sprinkles in little character touches and running jokes that keep you invested in the action bits and the McGuffin plot. I’m not sure everyone will connect with the sometimes daringly silly humor, but I loved it. (“We’re just like Kevin Bacon!”) The dialogue has some heartfelt, cheesy moments and is pretty sharp for the rest, bad guy exposition-heavy dialogue possibly excepted. I have no idea how many people have secretly toiled over the script. In any case, it is unusually coherent for a big-budget blockbuster. 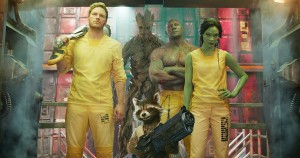 There are just minor things to nitpick here. The film suffers from short-term memory loss a few times when good guys/gals who seem to be badly wounded have suddenly recovered by the next scene. Also, the heroes are cavalier with the lives of others. This makes sense when people try to kill them as turnabout is fair play. But especially during a prison break, it feels wrong that they seem to be cheerfully maiming and arguably offing guards who are presumably not all that Evil and just doing their job. And the heroes are maybe a little too quick to bond and declare each other the only friends they ever had. But then the movie is already over two hours long, there is a lot of stuff to get to and the shorthand can easily be forgiven.

What it boils down to is that Guardians of the Galaxy is a good, old-fashioned breath of fresh FUN. It is rollercoaster, feel-good escapism with a heart. If possible, catch it in 3D. The extra dimension is not essential to enjoying the movie, but does add to the immersion.