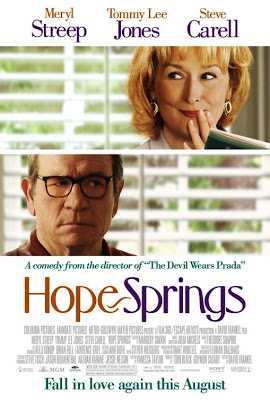 The romantic life and especially the sex life of married people in their sixties is not a topic oft-encountered at the movies. Going by romantic lore, I guess you are supposed to have settled into your happily ever after by that age already, no questions asked. So it is refreshing that the rather sappily titled Hope Springs focuses on these relatively taboo topics. The movie is about a couple who find themselves in a marriage that has lost any semblance of vitality long ago. Kay (Meryl Streep) is a sad and lonely woman longing to have a real connection again with her husband Arnold (Tommy Lee Jones), but has been afraid to speak up. For his part, he is going through his daily routine like a sleepwalker. He doesn’t seem especially happy, but is oblivious to her feelings or to the fact that things could or should be different.

When Kay comes across a book written by a lauded relationship therapist (played by an unusually subdued Steve Carell), she sees a week of intense marriage counseling with him as a last resort to save her marriage. Arnold begrudgingly comes along, convinced it is a waste of time and money, but as they go through their sessions something starts to happen. I don’t want to spoil whether it brings them back together or makes them at peace with breaking up, but it is a sweet character study acted to the hilt by Streep and Jones, with great support from Carell. Neither party is to blame for them growing apart exactly, but as the therapist has them reflecting on their past, it does become clear how the slow process took place. There are some gender cliché’s at play, but certainly among an older generation, those are likely indeed still valid. Going by the audience in the theater I was at, the movie mostly appeals to women in the 50+ category. There was a group of said category in the row behind me and going by the enthusiastic feedback they were giving each other, it hit home.

I really liked this movie, but do have to agree with other reviews that point out the horrible use of introspective pop songs on the soundtrack. Tunes with very blunt, obvious lyrics are applied to emotional scenes on a few occasions, to hammer home what the characters are feeling, even though the actors are doing a very good job of bringing that across already. It’s a bit like having great chef cook you a delicate meal full of subtle flavors and then pouring an avalanche of generic ketchup all over it. It wouldn’t matter in a soppy teenage romance movie, but is completely out of place here and you wonder how no one during the editing of the movie caught it. A studio underestimating the audience perhaps? In any case, go see this movie if you’re in a long-term relationship. And avoid getting to the stage of estrangement Kay and Arnold were at.