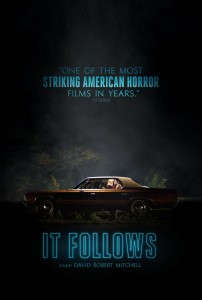 I had heard great things about It Follows – along the lines of it being the best horror movie in ages. So I was happy when I had a chance to finally see it. Unfortunately, high expectations can lead to disappointment. I was left a bit confused about why the film came with so much hype.

Sure, It Follows looks and sounds great. There is an art-house sensibility to the framing of the shots and the soundtrack is ominous, sometimes calling to mind synthy eighties horror films, at other times just throbbing or moving into discordant noise. The idea behind the movie is also intriguing, a new spin on the ‘sex equals death’ cliché preached by a lot of horror films. A deadly force is passed on through sex. When you’ve been tagged, your only way to escape being stalked and ultimately killed, is to pass on the Evil by having sex with someone new. This now makes your partner the target. But if the Evil gets him or her, it will start moving back down the chain of sex partners.

The problems for me were the pacing of the movie and the limitations it set for its monster. Like the shapeshifting Evil as it walks in a straight line to its current target, no matter how far away he or she is, the film is slow and methodological in its approach. As a small group of teenagers assembles and pieces together what is going on, very few of them are actually at risk, because the Evil never focuses on more than one person at a time. Weirdly, though the Evil seems extremely focused and task-oriented for the most part, following its simple but strict set of rules, it is not above some random showboating, like climbing naked on the roof of a building just to freak someone out.

The world the movie paints is odd – parents are mostly absent and adults in general only exist on the periphery. The teenagers make some stupid mistakes, but then they are teenagers. However, there is no excuse to crouch down and have your face close to an edge you’re peering over, to check if Evil is hiding just below.

I wondered why someone didn’t come up with my slightly immoral but practical solution of shagging someone on their way to a distant location – a globetrotting steward preferably – which would give the Evil a proper challenge as it kept trying to catch up. It seemed averse to taking a car, so assuming it would forego planes too, it could end up taking a very long walk along the bottom of an ocean.

I didn’t really feel the tension or was creeped out as much as I was expecting to be. The ending felt inevitable and not all that satisfying. As Dead Teenager movies go, this one is more arty than usual and has better acting, but it feels a bit sedate. An okay horror movie then, with more than the usual amount of metaphor, but not all it’s cracked up to be.