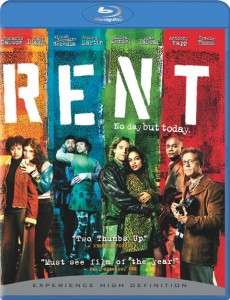 I recently saw the movie version of RENT, an adaptation of a Broadway play I did not see. It is about a group of Bohemians in New York at the end of the eighties, trying to keep their head above water and a roof above their head without selling out. Director Chris Columbus (Home Alone, Mrs. Doubtfire) filmed it shortly after directing the first two Harry Potter movies but doesn’t leave a distinctive mark. The original play was cruelly spoofed in the puppet-comedy Team America, which showed a musical number called ‘Everyone has AIDS’. And a lot of people in the movie do indeed have AIDS and are on the then new – and fairly toxic – drug AZT but are far from guaranteed to beat the disease. It’s odd to have the word AIDS thrown around so much, when nowadays people have HIV and only get diagnosed with AIDS if treatments fail and they get into more trouble. But then RENT definitely feels like a period piece, set in a time of anger and activism. Its family of friends are angry at corporate America while fighting – and singing – amongst themselves about matters of love and politics.

Saying this may cause someone to come and take my Gay Card away, but I generally don’t like musicals. It’s jarring to have people burst into song for no apparent reason and even sillier when other people start to join in with the singing, knowing the lyrics through some neat trick of telepathy. The cast of RENT does this kind of impromptu group harmonizing with alarming frequency. The sometimes daft and forced lyrics don’t help. (Sample: “Who do you think you are? Barging in on me and my guitar”) And while a musical like Moulin Rouge cuts all ties with reality and moves into a circus-like hyper reality, making it easier to just go with it once you have taken the initial jump, RENT clings to realism uncomfortably. To hear people sing how cold they are, burning precious belongings to generate some heat, only to then topple these burning goods out into the streets as a form of ineffectual though visually interesting protest, seems – well – just stupid. Grittiness and musicals are not an easy mix to pull off.

RENT is considered to be a classic, but it left me feeling decidedly ‘meh’. Most of the melodies didn’t stick in my mind for too long and especially the rockier numbers handed to ‘Roger Davis’, a character seemingly molded after Bon Jovi, left me cold. Actrice Tracie Thoms comes off best and is graced with two of the more interesting songs: ‘Take Me or Leave Me’ and ‘The Tango Maureen’. Of course, music is a matter of taste more than most other arts and maybe on second viewing the numbers would reel me in and get me humming along, but the sometimes daft rhymes and overall lack of a good first impression, discourage taking a second listen.

It seems that the songs get in the way of the story in RENT: building nuanced characters through lyrics is a tricky business and this musical doesn’t quite succeed. The cast comes off as a vehicle for the songs more than a collection of living and breathing individuals, each with their own complex personality and goals. You don’t feel that you really get to know them, the movie just skimming their stereotypical surface. Together with the frequent song-breaks derailing reality, this makes it hard to get involved in the story.

However, if you don’t mind the silliness of someone who is on the edge of death from shooting up heroin – found at just the right dramatic moment by her friends – opening her eyes and going straight into a duet with her star-crossed lover, you may want to check it out. 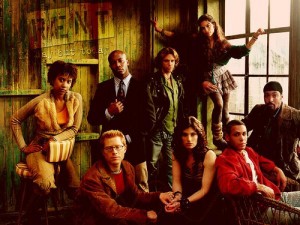