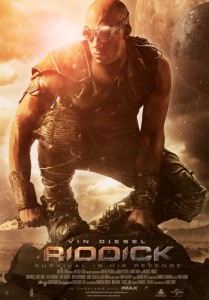 When Pitch Black came out in 2000, it seemed like an unassuming, stand-alone horror-movie which borrowed heavily from Aliens, while adding enough uniqueness to the formula to make it interesting. It starred Vin Diesel as the not especially talkative Riddick, the enigmatic prisoner of a bounty-hunter. Stuck on a planet with a little group of people and swarms of deadly creatures, it was unclear if he was friend or foe to his companions. The movie became somewhat of a cult classic and I really liked it.

However, writer/director David Twohey and lead actor Vin Diesel were not done with the character and his universe yet. The Chronicles of Riddick followed, once again plopping the titular character into captivity, but this time as part of an overblown, special-effects riddled space opera powered by what seemed like intergalactic Egyptians and metaphysical meanderings. It didn’t do so well, but Twohey and Diesel persevered, using their own capital, so now there is a new chapter in the saga, simply called Riddick.

Riddick – the movie – bookends itself by referencing Chronicles but seems to want to get back to its Alien-esque roots. It’s divided into three distinct acts. The first is an overlong section about one man’s survival on a hostile planet, the second one is a pretty standard action movie involving mercenaries, and the third one is a monster movie that apes Pitch Black but lacks tension and the element of surprise. Flowing throughout is some truly awful dialogue between the characters. They try – and miserably fail – to sound tough and cool. It’s like they just filmed the first draft of a script, one that apes better sci-fi and action movies without understanding what actually made them work . 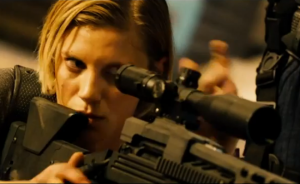 Riddick – the character – gets less interesting the more we see of him. Cornball dialogue hurts his appeal and he just seems to be a bit of a dick, as well as creepy in seemingly unintended ways. Among the mercenaries is woman who is matter-of-factly established as a lesbian (played by Katee Sackhoff of Battlestar Galatica fame) but that doesn’t stop Riddick from hitting on her and commenting on, among other things, the color of her nipples. (Don’t ask.) Of course, this is also the kind of movie where he intrigues her and she flirts back, because in this macho fantasyland, all it takes to turn a lesbian straight, is to meet the right, über-butch guy. (Natch.)

You’d hope the Riddick saga would end with this movie, but it doesn’t. The final scenes set up yet another sequel that would head into space opera territory again. Twohey and Diesel seem determined to continue expanding their universe, even if it takes them decades and even if they have to self-fund the undertaking. So whether or not Riddick makes its money back, there may indeed be a sequel. You have to admire their dedication, even if it is hard to admire the final product. 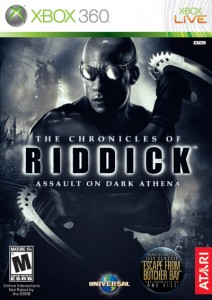 Ps: there is also duo of prequel videogames named The Chronicles of Riddick: Escape From Butcher Bay and Assault on Dark Athena. Especially the first game received high marks from reviewers, so if you want more Riddick, you may be better off hunting down these games. Specifically the X-Box 360 version, which bundles them together.