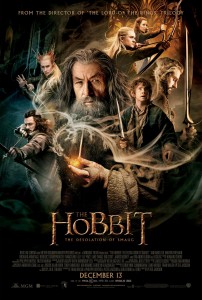 I don’t have much to say about The Desolation of Smaug as far as plot and acting go. The middle part of the trilogy is basically just more of the same, an overlong but entertaining fantasy ride with some scenery-chewing. Cumberbatch is fun as the dragon Smaug, and the scenes with him are a highlight. The movie pulls a The Empire Strikes Back by ending on a cliffhanger, though the seeds to its resolution seem to have been planted a bit too obviously. I’m still not convinced that The Hobbit needed to be extended into three movies.

The trilogy was shot and was/will be released in the HFR (High Frame Rate) format. The human eye allows for more ‘frames’ of movement per second than have been used traditionally in film, and HFR should make for more fluid, realistic movement. It is seen, by some, as a natural evolution in filmmaking. However, you can still choose to see the Hobbit movies in the old-school, regular frame-rate. Which version will give you a better experience is up to debate.

The Desolation of Smaug was the first movie I saw in HFR. It feels more like actually ‘being there’, though that doesn’t necessarily mean ‘in the fictional world’ but can also occasionally mean ‘on the set, with the actors, watching the movie get filmed’. I didn’t see the first part of The Hobbit in HFR, and apparently the process was tweaked for the second movie, following criticism. I found the HFR a mixed experience. Some high-speed special effects sequences and some of the computer-animated characters looked more ‘real’ and convincing than usual. But there were also some mid-range shots of actors on sets, where it felt like I was watching a making-of documentary. And there were one or two green-screen shots that looked distractingly fake, though I can’t say for sure if that was HFR-related. A certain amount of gloss was lost, but – when it worked – it managed to sell its fantasy world as real with less difficulty.

I will definitely check out the final part of the trilogy in 3D HFR again, out of curiosity about further tweaking, if nothing else. Like HDTV, HFR may be something that people will stop even noticing in time, when movie-makers learn to optimize the positives and minimize the negatives. Until both the audience and movie-makers adjust,  HFR may be better suited to more intimate, art-house productions, where a documentary feel enhances rather than detracts from the experience.