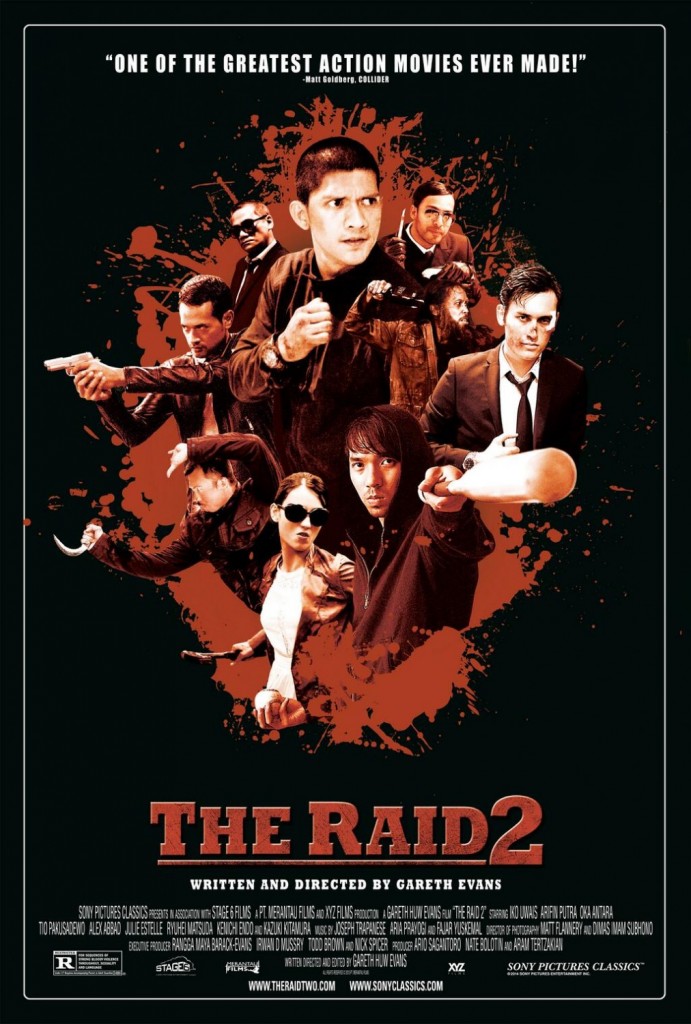 I imagine that doctors, chiropractors and undertakers will be watching The Raid 2 with dollar signs in their eyes. This is a very bloody movie, where you will soon become used to the sound of bones breaking. Its story picks up right after the end of the first Raid movie, wraps up some loose ends, then speeds into a new storyline. The premise remains the same; good cop Rama (Iko Uwais) has insane martial arts skills and takes on both the mob and corrupt cops. The first movie was elegantly simple – Rama battled his way up a building full of crooks to end up facing their leader. (Oddly, that movie came out in the same year as Dredd, which has the same basic concept, but adds scifi elements.)

This time around Rama goes undercover with the mob in Jakarta to further root out corruption and crime. To get the negatives out of the way; the way in which he does this seems pointlessly convoluted and looking back, he doesn’t have much of a direct impact on the machinations of the mob until the very end. The story isn’t so deep that The Raid 2 warrants going on for two and a half hours. When the movie drops the pretense of being about emotions and turns into a violent ballet for machos, you’re hypnotised, but the talky scenes do tend to drag on. 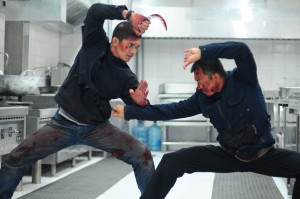 The film maintains the franchise’s flourish when it comes to showing fights. It is full of creative ideas on how to make them look pretty. For instance, there is a mano-a-mano in a kitchen, where the floor beneath the fighters starts to turn red with blood as fists and knives hit their mark. When one of the men finally crumples to the floor, he becomes part of the smudged abstract painting he and his adversary made. The fighting choreography is amazing overall. Hits seem to really connect and they look painful. I wouldn’t be surprised to hear that a fair amount of actual sprains and breaks happened during filming.

The people in this movie are remarkably inconsistent about when they pull out a gun. I guess this abstraction is necessary because a movie revolving around martial arts would be hard to pull off otherwise. Those skills aren’t really useful if someone shoots you dead before you get in range. But realism aside and despite the long-winded story, the movie delivers a kick that unlike the ones on the screen, is pleasurable. As the open ending suggests, a sequel is already in the works, and once again Welshman Gareth Evans will be writing and directing the Indonesian action flick.