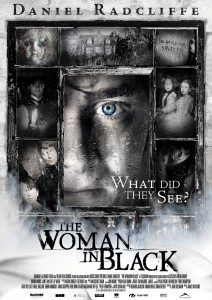 Daniel Radcliffe is immensely likeable. He doesn’t just have the specter of saint-like Harry Potter still hovering over him, he is also very outspoken about potentially controversial topics like gay marriage. He has made sizeable donations to – and starred in public service announcements for – The Trevor Project, which supports gay teens. And there is a charming rebellious streak apparent by him copping to being drunk quite a bit while filming the last chapter of the Harry Potter-saga and by going full-frontal on stage during a production of Equus. He is clearly trying to put some distance between him and his bespectacled alter-ego and his first movie on that path is The Woman in Black.

The Woman in Black is an old-fashioned haunted house horror movie that aims to make you squirm not by throwing entrails at your face, but by having carefully lit, spooky surroundings through which the camera creeps, dropping in the occasional unexpected burst of movement or a blast of sound to make you jump. Radcliffe’s primary role is to be the one who guides the viewer through these environments. Rather than run off screaming, he keeps stealthily sneaking towards whatever inexplicable noises echo through the house, which turns out to be less abandoned than advertised. His curiosity is ill-advised perhaps, but also necessary to keep the movie from being really, really short.

The primary motivation for his character to hang around is that he works for a law-firm and has to sort out the paperwork to be able to sell the mansion or lose his job and therefore the means to support his young son. Also, he is still grieving for his wife and is intrigued rather than scared by the idea of ghosts, as that seems to point to an afterlife in which he could be reunited with her. The locals of the town neighboring the house seem very keen to be rid of him, but rather than vocalizing exactly why that is, the writers prefer to have them make vague, ominous comments in an aggressive tone. Looking back, there is no convincing reason why they wouldn’t just spit out the entire back-story of the mansion and run him off. Radcliffe has to find out the slow, roundabout way what happened there and why children die violent deaths in the town at a higher than usual frequency.

The movie is not exactly an acting stretch for Radcliffe, his moods being fairly muted for the most part and switching primarily between sadness, apprehension and fear. But he does make you forget about Harry Potter for long stretches at a time, helped by a period look (end 19th century) that makes him appear more mature. He shies away from anything like glasses, that would remind you of his acting legacy. The Woman in Black isn’t a classic: it feels a bit slow despite being not all that long and though it sets the mood very well, it gets a bit more hokey near the end when the action is upped. But for a relaxed movie night at home with the lights off, on a big screen, curled up against a date, this nostalgic, atmospheric creepfest just about hits the right spot. 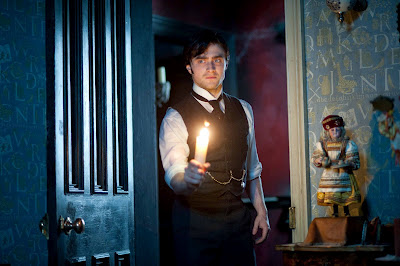