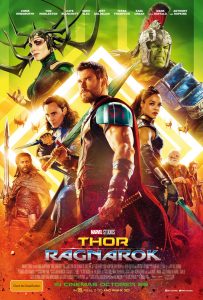 Someone has spliced Guardians of the Galaxy DNA into the Thor franchise. Where in previous movies there was some comic relief, the self-serious main man – well, main God – Thor usually was the clueless butt of the joke. In this movie, hanging out with sardonic Tony Stark and trickster Loki finally seems to have rubbed off on him and he has grown a sense of humor. Slapstick physical comedy and witty banter are constantly undercutting and making fun of grandiose moments without fully deflating them. Like GotG, the movie is good at making you laugh at all the bizarre stuff going on while still keeping you invested in the characters. In terms of continuity, the tonal shift is a little jarring, but because the move to comedy is so successful, it’s unlikely that viewers will care. Comic-book fans will be used to adjusting to these kinds of shifts, where one writer’s run on a book may have an entirely different ‘feel’ than what came before.

The main plot does not seem likely to be very cheery, portending doom for Asgard as it gets assaulted by the Goddess of Death (Hela – Cate Blanchett) and Thor (Chris Hemsworth) finds out that his family is even more effed up than he already knew. But the midsection of the movie detours from this drama and throws Thor into an intergalactic Roman Empire-style arena, pitted against a fellow Avenger, as spoiled entirely by the trailers and the movie poster. There is some impressive CGI going on with The Hulk (Mark Ruffalo), and I could imagine some poor, impressionable teens picking up a lifelong fetish for massive green musclemen. Showstealer Jeff Goldblum does his thing, playing the Grandmaster who sets up the fights and he looks pretty much like an intergalactic version of Jeff Goldblum should.

Apart from being a standalone story and introducing various new characters to the Marvel movie universe, Ragnarok is also clearly setting up elements for Avengers: Infinity War. Considering how much that classic story-line from the comics has been built up, the pay-off will hopefully not disappoint. In any case, Thor: Ragnarok stands on its own very well, though it’s clearly holding hands with Guardians of the Galaxy. 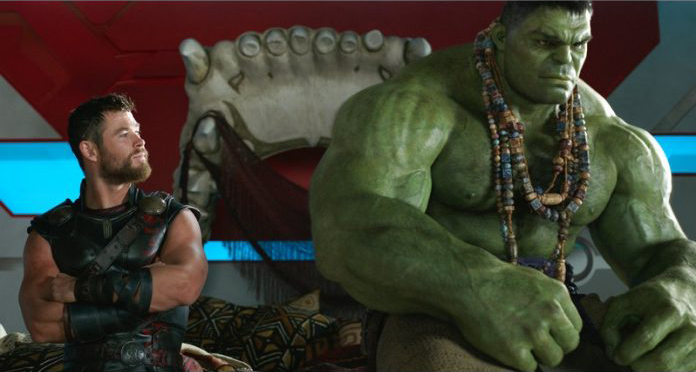