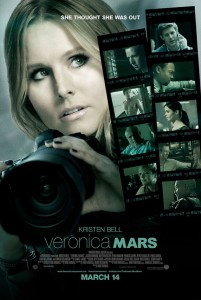 Veronica Mars and I used to be friends a long time ago, but then she suddenly disappeared from television, leaving a cliffhanger in her wake. The series had a rabid following but it wasn’t quite sizeable enough to persevere. It didn’t seem there was any hope for a proper resolution, but then creator Rob Thomas went to Kickstarter to crowdfund a television movie. Lo and behold, in literally record time he had enough dosh to make a go of it.

Veronica (Kristen Bell) is the daughter of police officer-turned-private-investigator Keith Mars (Enrico Colantoni) and she does her own share of professional snooping. This worries the affable dad and makes him proud in equal measure. There are plenty of things for Veronica to investigate at the high school she attends during the orginal series. The mysteries range from minor stuff to rape and season-spanning murder cases. As a high school is the backdrop, there is also plenty of relationship drama. The city in which it all takes place – the fictional Neptune, California – is typified by corrupt police and a wide divide between the rich and the poor. Snappy dialogue abounds. Think Buffy minus the supernatural. The demons here are just people behaving badly and with everyone acting all noir, there is no need for a Hellmouth to create conflict. 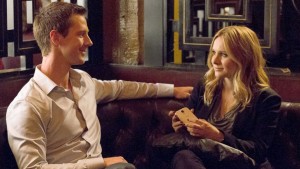 This time around, Veronica is drawn back into a web of intrigue when her former love interest Logan (Jason Dohring) is accused of killing his girlfriend. She has to weigh her potentially bright future at a law firm against a financially less appealing career as a private detective. Is this investigation one last fling or will the old team she reassembles be in it for the long haul? Whatever the murder case may be, it will of course lead to deadly peril. 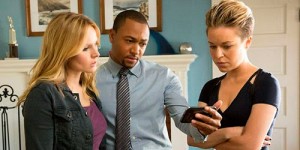 You can watch the movie without having seen the series, as it provides the basic information you need. But you will likely not enjoy it as much as someone who is a fan already. A lot of it will fly over your head unnoticed and unappreciated. And though the film is entertaining in its own right, it does feel more like a nice addendum to the series rather than something that should stand on its own. The cast is clearly eager to be back together and chemistry abounds, though the movie doesn’t totally recapture the magic of the series. The texture and flow of a movie feels like an odd fit for Veronica Mars; it’s a sprint for a series that did the marathon very well.

Still, Veronica Mars – The Movie, does exactly what it should do. It provides closure to the fans who Kickstarted the film, while leaving the door open for more Veronica Mars in the future.