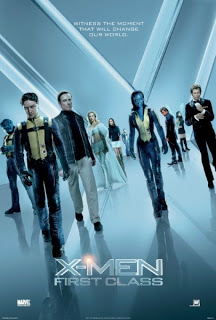 The X-Men movie franchise has had it rough lately. X-Men: The Last Stand showed a great drop in quality after the pretty good first two X-Men movies: director Bryan Singer had decided to bail on the series after X-Men 2 to direct the very disappointing Superman Returns. He left the reins to Brett Ratner, a man with a reputation for making generic blockbusters and Ratner created a rambling mess of an X-Movie, losing a lot of goodwill for the series. X-Men Origins: Wolverine also underperformed, sinking plans for X-Men Origins: Magneto. The project was morphed into X-Men: First Class.

It shows how the X-Men team first came together in the sixties and how Magneto and Charles Xavier went from being friends to being enemies. In the comics – and in the continuity set by the first two movies – these two were friends for a very long time, but here it doesn’t seem more than a few weeks. It’s symptomatic of how the movie takes the continuity of the previous X-movies, gives cheeky nods to it and then just as easily disregards elements of it. Very funny blink-or-you’ll-miss-it cameos by Rebecca Romijn and Hugh Jackman tie the movies together, but for each bonding moment, there is an incongruity to push the movies apart. By the end of it, I still wasn’t clear on if I had been watching a prequel or a reboot of the X-Men movie continuity.

Magneto is well-served by the story and is acted well by Michael Fassbender. His traumatic childhood in a concentration camp (which ‘borrows’ the first scene from the first X-Men flick) and the ensuing hunting down of his Nazi tormentors make for some of the most interesting scenes in the movie. Maybe Magneto is a bit too sympathetic even, as I think you are supposed to be on Xavier’s side by the end of the story, but you may well end up on Magneto’s. Charles Xavier is entertaining as played by James McAvoy though I have trouble picturing his version of Xavier physically and mentally changing into Patrick Stewart. Other characters of note getting an origin here are Beast and Mystique.

Yes, there are a lot of other characters here as well, but frankly most of them don’t have much of an impact. The X-Men comic universe is a grab-bag of mutants both good and evil, but the grabbing here was oddly random. We get Alex Summers as Havok, in comics lore Cyclops’ younger brother and a much later member of the X-Men, but here one of the first to join with no mention or sign of his elder sibling. We get Banshee and Emma Frost, the sonic scream and diamond form respectively not translating particularly well to the big screen. The sparkly features of Frost never fail to look like an intricate but unconvincing special effect. Darwin and Angel – a different Angel than the one from the first trilogy – have no apparent purpose, are not especially personable and could have been any number of more interesting characters. The bad guys underwhelm: Riptide is mute and occasionally lets rip with bursts of air by waving his hands and Azazel looks like Nightcrawler painted red, which makes sense if you know he will end up being his father, but most viewers won’t know of that comic book connection. Kevin Bacon as Sebastian Shaw – leader of the evil pack – is more smarmy than intimidating.

The sixties’ setting of the movie and the tying in of the Cuban missile crisis are interesting, but certain more touchy aspects of the era – sexism and racism – are conveniently ignored, making it feel more contemporary than perhaps it should. There are the usual plot holes and inconsistencies along the lines of: ‘Hey, if he could do that earlier, how come he doesn’t do this now?’ For instance: Magneto can rip apart a boat with an anchor, but can’t rip a hatch off a submarine and sink it? And why didn’t Magneto kill his main tormentor when he clearly had the opportunity to do it as a kid at the beginning of the movie?

Now, all of this sounds like I didn’t enjoy the X-Men: First Class, but despite the nitpicks I did. I got more excited about it than about Thor in any case. Though it barely holds together in some spots, there is a lot more going on and there is more of an interesting moral grey area, plus the standard, none-too-subtle outsider metaphor to work with. Being pretty familiar but not entirely up-to-date with the comic book version of the X-Men I had fun trying to unravel the messed up continuity and figuring out where they would be going with all these remixed elements. I am curious if they will follow up this movie with a sequel to the prequel – which could be good, if they ditch a lot of the dead weight – or an actual X-Men 4. I would probably prefer that, as it could wash away the bad taste of X-Men: Last Stand and maybe give the saga a proper ending.

Final nitpick (SPOILER): I defy anyone to explain to me how Xavier and Co. managed to escape off the besieged island at the end of the movie.