I am not sure what it is about animated films that gets me involved in the story so easily. Even corny sentiment easily chokes me up in this form. Maybe the suspension of disbelief makes it easier to get lost in the narrative or maybe it’s just the simple stories and often childlike cast with their usually big, teary eyes (as parodied by the cat in Shrek 2). But I do have to admit that I like the medium especially for the capacity for silliness. The Emperor’s New Groove with its many jokes that broke the third wall is one of my favourites and is still sometimes ripped off for a punchline in my daily conversation. (‘Noooo touchee!’) Recently I saw a couple of animated movies within a week, though apart from the drawn aspect, most had little to nothing in common. 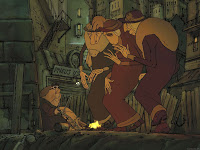 Les Triplettes de Belleville is an odd, wildy charming French flick, that’s bursting with character. A grandmother raises her grandchild to be a cyclist in the Tour the France, and finds herself battling the French mob when they kidnap him for nefarious purposes. Luckily she runs into musical triplets, who help her kick their ass and perform some funky music as they do so. There is almost no dialogue, but what there is and the general mood is very French. The mob has giant bottles of wine on the building that is their headquarters, and their cars sport the phrase: In Vino Veritas.

The look is one of exaggeration and extremes: faces are distorted and distinctive – hooked noses, faces with wrinkles that swallow up everything else, huge teeth and ears and so on, boats tower ridiculously above waterlevel, seemingly about to keel over at any moment and buildings stand at dubious angles while trains pass by that could be touched from the windows. Logic is cheerfully thrown to the wind, which such charm and reckless abandon that you will happily go along with it: at one point grandma and her dog manage to wither storms while crossing the Atlantic – or so it appears – on a waterbike (!) in pursuit of one of those bizarre boats. You want this old lady to win and you don’t care that the universe has to be distorted in her favour to make it possible. The triplettes are slightly more dubious heroines, with a strange predilection for using explosives to blow up frogs – for food – and gangsters – for a quick getaway.

By comparison, the morality tale that is A Bug’s Life seems very tame and family-friendly. An ant who is an outcast sets off to save his colony from disaster and blunders his way to success and acceptance. Rescue comes in the way of a travelling circus consisting of various insects, most notably a ladybug who is a guy and a posh walking stick voiced by David Hyde Pierce from Frasier. I don’t really have much interesting to say about it except that it manages to entertain in the way most inoffensive Disney movies do. It is not one of the ones that has an added level for adults that makes it more than kiddie fare, but the computer animation and the characters are pretty good. As it turns out, from the perspective of an insect, a bird can really be scary. On the other hand, this nemesis also makes you ponder how selectively the intellect has been distributed in the movie. The bird is as brainless as the ones we see every day, but all insects have secretly been bypassing them on the evolutionary ladder, or so A Bug’s Life wants us to believe.

Moving Castle in later years and brought us some great movies before that too (like My Neighbour Totoro). Pretty much all of his movies are worth watching, even if Howl’s rambles on a bit and isn’t all that coherent. He has a way of setting the mood and taking the time to tell a story. His worlds are spooky and magical while somehow feeling real and lived-in. Usually there are some little creatures involved that ride the line between cute and creepy, like the little tree-spirits in this movie. And a recurring theme is that of the spirits of nature coming in conflict with the threat of pollution caused by man. In this movie especially that theme is very explicit. The Gods of the Forrest fight against humans who are trying to use the land for financial gain and don’t care about the damage they do to it. The Princess of the title has been raised by one of these gods (a big toothy Wolf) and comes into conflict with humankind and with Prince Ashitaka in particular.
I originally saw this with subtitles, which was good because the original voice performances are better than in the dub (by various big Hollywood names) and the mouths in the dub don’t even remotely line up with the words. But the bad thing was that some of the details were lost on me. It seemed a lot more coherent and involving second time around. There is plenty of action, and there are some gross-out scenes involving blood and goo, also a staple of director Hayao Miyazaki. 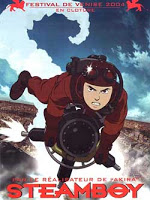 Steamboy too belongs in the Manga section, but though I really wanted to like it, it was a bit disappointing. The computer-aided animation is spectacular, as is the action, but the story did just not make any sense. It is set in an alternate reality past, seemingly inspired by Jules Verne, where amazing machines are running on steam. A globe capable of storing near infinite steam power gets chased after for most of the movie, which ends with a lot of random destruction, the no doubt many casualties of which are not at all addressed. One of those films that entertain while you watch, as pleasantly noisy nonsense, but doesn’t really stick in the mind.

Now the one that did very much stick in the mind: Grave of the Fireflies. It tells a fairly simple story beautifully, slowly breaking your heart as it does. Since the movie opens with the scene I am about to mention, I am not spoiling anything by saying that it does not have a happy ending: the death of Seita, from hunger during the Second World War in Japan. Very soon the movie flashes back to a moment just before his town got bombed. We get just a glimpse of a happy childhood before tragedy

strikes. His mother succumbs to burn wounds from one of the bombings, his father is at sea as part of the navy and can’t be reached. He tries to take care of his little sister Setsuko, a sweet and bubbly girl, while both fight the trauma of losing their mother. A bitchy aunt ends up chasing them out of the house after food becomes in short supply and she realises there is nobody to take them off her hands. The brother and sister try to survive on their own, but as was shown from the start, they fail. Despite being Manga characters, with somewhat cartoony faces, they are painted so realistically through their actions – little, very human details throughout – that you will by the end be crying for them, two innocents ground up in a war that fails to take any notice of their tragedy. I don’t think I ever saw a movie with a stronger anti-war message; not by preaching, just by showing. It hurts to watch, but should be watched. There are some beautiful, poetic scenes full of life in here, which only make the contrast to the horror stronger.