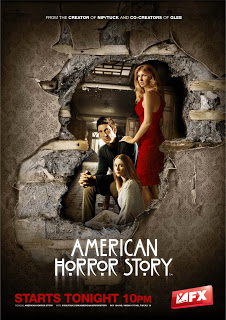 American Horror story is a series by the creator of Nip/Tuck (Ryan Murphy) and the co-creator of Glee (Brad Falchuk) which tries to marry the ‘haunted house’ subgenre of horror with a serialized format. It follows a couple on the verge of divorce (Connie Britton & a butt-flashing Dylan McDermott) and their daughter (Taissa Farmiga), who move into an ominous-looking mansion and stay there despite various creepy and even downright life-threatening things happening to them. Admittedly, the series comes up with some practical and pseudo-mystical reasons to explain why the Harmon family sticks around, but they just aren’t all that convincing. As a viewer you ultimately have to go with it, reasoning that if they would run off screaming, there would be no series. And that would be a shame because it is actually rather good: atmospheric, if more adept at making you squirm than making you scared. It is somewhat luridly sensationalist but very entertaining.

What makes the series work, is that it is good at finding topics and situations – sometimes subtle and mundane – that make the majority of people uncomfortable even if the fear is often based on gut feelings that are not quite politically correct. It checks off high-school shootings, down-syndrome, fetish gear, gay sex, infidelity, pregnancy scares, disfigured faces (body horror in general) and food scares. My favorite: a white, straight man’s fear that a strong, handsome black man will make a move on his wife and all the below-the-belt insecurities this anxiety ties into. The series doesn’t state the fear outright – it generally doesn’t – but that’s what is being played on. The neat trick it manages to pull off, is that it stays fairly politically correct and sympathetic despite playing on the more base instincts. A gay man getting a baseball bat up the butt – off-screen – is a cheap shot, but works to make the viewer cringe and the recurring gay couple is shown to be as (un)likable as the rest of the cast for the rest of the time. Not their sexuality but the dynamic of their relationship gets most of the attention, featuring a good acting job from Sylar, aka Spock, aka actor Zachary Quinto, who recently came out of the closet.

American Horror Story is fast-paced and employs such visual tricks as uncomfortably close close-ups, fuzzy-vision and floaty-cam on occasion. It even has a tendency to forget wrapping up scenes in its desire to move right along. Especially in the first couple of episodes, there are awkward conversations and situations that are suddenly abandoned, clearly to make sure the tension is not released and instead carried over to the rest of the episode, but they leave the viewer thinking: ‘There’s no way that was the end of it. How did that play out?’

As the series progresses, we get flashbacks to the horrible history of the haunted abode, which houses dark secrets layered to an almost comical degree. They do tie together somewhat even if the overarching explanation remains vague. Considering the concept of a haunted house, I don’t spoil much when I say that at some points ghosts make an appearance, who come with a not very clear set of existential rules attached. Especially the question of when and why some of them show up, while at other times they are conspicuously absent and don’t even seem to be listening in, is a bit of a head-scratcher. 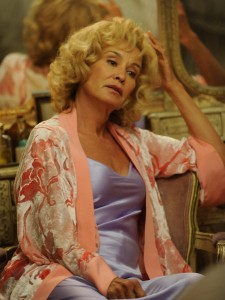 I haven’t yet mentioned one important reason to watch this show: Jessica Lange, who plays an aging Southern Belle like no one else can and clearly relishes the opportunity. She lives next to the Harmons with her down-syndrome daughter and a closet full of skeletons (speaking figuratively, but only just). Fascinatingly creepy, she steals any scene she shows up in. Actually, I could have watched Jessica Lange watch fresh paint dry for the duration for the series without getting bored.

Though the first season of American Horror Story wraps up most of the plotlines nicely by the last episode, a second season is in the works. The idea seems to be to tell a fairly self-contained, serialized story per season, loosely linking one to the next by way of a few returning cast members. I am curious about the next chapter, but this series is off to a good start. And seeing Dylan McDermott crying-while-masturbating is a sight that will haunt me for a long time to come. 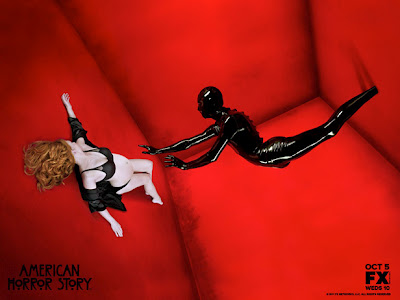