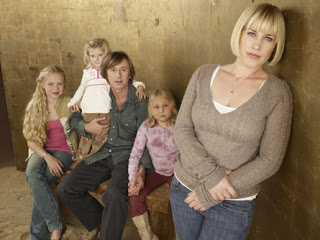 Medium is a guilty pleasure for me. Not because it is necessarily badly written or produced but because it is less edgy than the stuff I generally go for. To sum up the concept: psychic mom Allison Dubois (played by Patricia Arquette), her loving husband Joe and their three wholesome daughters deal with complications caused by mom’s gift, as she uses it to help Phoenix law enforcement solve crimes. In early episodes the emphasis was on the crimes, but over the course of six seasons the home front has been gaining more and more screen time. This is just as well, as the cases tend to be a bit formulaic and in Medium, home is really where the heart is.

Pretty much every episode starts with Allison waking up in a shock from a dream related to a crime past, present or future. Sometimes the dream is a simple fly-on-the wall observation of the act or of moments right before or after, but you can be sure you’re not being given the full picture. The perpetrator is rarely clear and the visions are often remarkably tricky and subjective, setting up a twist for the writers to pull out of their hat for the final act of the episode. It seems that Allison is meant to prevent further crime on the basis of the dreams, but the rules that govern them are confusing and inconsistent. It’s not really clear why the spirits don’t just spit out what’s on their mind but prefer to peel back the layers on their message bit by bit, in a series of dreams. Allison also sees the occasional ghost. These ghosts seem to know what’s coming up in the future from their vantage point, guiding or manipulating her one way or the other. Why these ghosts have it together more than the ones reaching out through her dreams is not explained. She also has the occasional vision when hearing someone talk or when holding an object. But this apparently happens only when a case would be dead in the water otherwise. In early seasons, it was stated that Allison’s power rarely – if ever – gave her insight into (or affected) people she knew personally, but as the focus of the series shifted to her family, so did her visions.

The more you watch Medium, the more you realize the modus operandi of the afterlife is molded to the needs of the plot of a specific episode. This makes the tension feel artificial, as you are aware you are being pretty blatantly manipulated by the writers. Additionally, once you have watched a bunch of episodes, you tend to get wise to what information is being distorted or left out early on. You’ll end up seeing the twist coming long before Allison does. Of course, the viewer has the unfair advantage of knowing Allison is in a television series, being moved through a plot, but figuring out the truth long before she does – time and time again – does make her seem a bit slow on the uptake.

Allison works on her cases with district attorney Manuel Devalos and detective Lee Scanlon. Neither of these characters is given a lot of depth or heart and mostly they serve to regurgitate plot points. Devalos is a straightforward, moral man who lost a daughter and truly loves his wife. Scanlon is a taciturn, rigid guy, with limited emotional range and commitment issues. Neither of them overflows with charm. They have odd lapses in skill, sometimes forgetting about fingerprints or DNA evidence which you realize – once it is revealed to you how a crime really happened – should have been found earlier on in the investigation.

The true fun is to be had with Allison’s husband Joe (played perfectly by Miguel Sandoval) and the three daughters, who are moving through their growing pains as the seasons roll by and are dealing with the psychic abilities they inherited from their mom. The eldest is sensitive and all about boys and make-up, the middle one is willful and goofy – more frogs and snails than sugar and spice – and the youngest one is quiet and shy (so far). Having kids on a show who are charming and funny without being obnoxious or precocious is a pretty rare occurrence and Medium has nailed it. My personal favorite is the middle child, though a friend of mine disagrees and gets irritated by the ‘funny’ one, so personal mileage may vary. Joe is also someone you care about, as he tackles his unusual home life with an entertaining and believable combination of pragmatism, humor and worry.

What makes the show work is the contrast of this charming, happy family with the big, bad outside world in which horrible crimes occur. In a sense, the writers hold the family hostage, constantly threatening to have something happen to one or more of its members. It is an empty threat, because they know it would destroy what works about the show if they carried through on it, but you still care because the characters are so damn involving. Occasionally the show can feel a bit static, because nothing really changes within the family as the crimes-of-the-week are solved and forgotten.

The creator of the show is Glenn Gordon Caron, who also created Moonlighting. There aren’t that many similarities between the series, but there is a feel for funny-but-realistic dialogue that carries over and a willingness to experiment playfully with the format of the show. Oddly, there is a ‘real’ Allison Dubois with a husband and three daughters, an alleged psychic on whom Caron based the series. She has written a couple of books about the role she played in solving various crimes, though the police denies having worked with her. This by itself doesn’t discredit her, as law enforcement can’t exactly go to a jury and admit their evidence was gathered by way of a psychic. But a lot of the stories she tells in the books were also discredited by regular people who were involved in them. She is somewhat aggressively dismissive of skeptics and has stated that the portrayal of her family in Medium gives a fairly good impression of her home life. If that is indeed the case and she does indeed have dreams and visions like the ones in the series, she might want to ask those in the great beyond to stop being so damn cryptic and give her something to undeniably prove her powers once and for all.