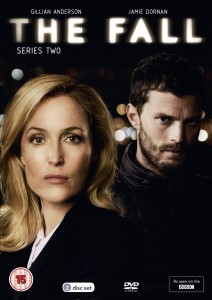 Jamie Dornan has a very odd typecasting problem. Before he started tying up volunteers for sexual kicks in the movie Fifty Shades of Grey, he was tying up women in the television series The Fall. Only here, the women were victims rather than kinksters.

The Fall is a deliberately paced, downbeat crime series by BBC Ireland and the other main player, apart from Dornan as serial killer Paul Spector, is Gillian Anderson as Stella Gibson, the Detective Superintendent tasked with hunting him down. There is no who-dunnit element. We follow Spector as he does what he does, even if we don’t understand why. The series does keep dripfeeding the viewer information about who he is and about his past, but can any amount of information really explain what made him into a killer? Gibson is equally hard to get a bead on. She is soft-spoken and measured but unyielding and is no big fan of the patriarchy. Whenever there is a gender double-standard or when a man starts posturing, she doesn’t hesitate to call him out on it. But she is far from a feminist cliché, not cold so much as distanced from herself. 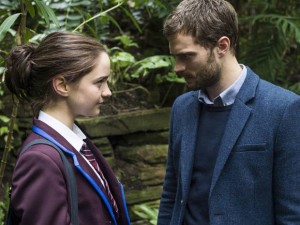 The Fall is about observation first and foremost. Scenes bounce back and forth between the killer and the detective, drawing out parallels or pointing out a contrast. There is an extended cast too, a babysitter haunted by teenage hormones, an unsuspecting wife and an innocent daughter, to name a few. Some of them are more complex than others, but the unifying theme is that you can never be a hundred percent sure about what is going on in someone’s mind. The interesting concept of ‘doubling’ comes up. This means that people – even sane ones – can have multiple personalities that should rationally clash, as they have opposing values, but co-exist paradoxically within a person. For instance, a serial killer may love his daughter but doesn’t find fault with killing other people’s daughters.

The episodes require your patience and your attention. This is not something to watch on your mobile on-the-go. There is always tension due to the cat-and-mouse game going on between the two leads – who rarely meet – and occasionally there is some brutal action – but mostly there are a lot of quiet scenes. Gibson speaks thoughtfully and softly, forcing you to focus. Spector is generally the quiet type too, though a smooth talker when he needs to be. He is a grief councellor who creates more grief than he heals. 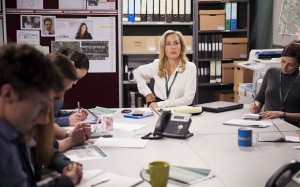 Going into the second season, I found out that a third season had been confirmed and I worried that The Fall would never get around to actually landing. Slow-moving to begin with, I feared that the story could lose its momentum. Thankfully, the second season finale does already have a fair amount of closure and with a little editing it could even have served as an ending. The third season is being billed as the final one, which is also encouraging. It seems that the end-game for the final five episodes is in place. How they will manage to fill these, is not totally clear yet, but it will be good to find out.