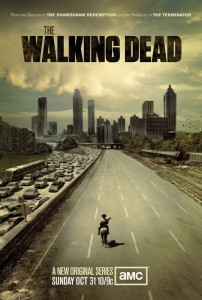 So I’ve reviewed the comics and the Telltale game. Might as well review the television series. The basic set-up for The Walking Dead in all its incarnations is the same. Interesting characters are forced to make morally complex life-or-death decisions in a post-apocalyptic world. The fact that there are zombies walking around, serves to up the tension and gore, but generally the biggest threat to the survivors are other survivors. The zombies are the slow and ambling kind after all, not especially bright and mostly a threat because they can form an overwhelming herd and will keep going until they get to you. One bite and you’re done. Occasionally, for reasons of plot-convenience, there may be a stealth-zombie which pops out from the corner of the screen without signalling its approach, but most of them grunt and moan loud enough to be easy to spot and avoid.

The tv-series and the comics serve as interesting alternate universes to each other. (The game is pretty much a separate deal.) Characters and situations from the comic may pop up in the tv-series but follow different paths. Some people who are still alive in the comics after 120+ issues are long gone by the fourth season of the tv-series, and vice versa. This is a smart move, allowing fans to play spot-the-similarity while never being sure what will happen next. 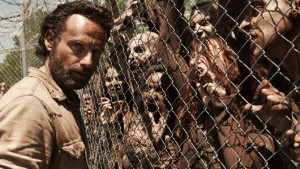 A big selling point of the The Walking Dead franchise (like with Game of Thrones) is unpredictability. Major characters may be taken out in an offhand manner when you least suspect it. No fun for the actors, but far more interesting for the viewers, who can never assume someone is safe just because he or she is likeable or seems important to the plot. Creator Robert Kirkman has been threatening for years to kill off the main man (ex-cop Rick Grimes, played in the series by Andrew Lincoln) and just because he hasn’t done it yet, doesn’t mean he never will, on-screen and/or in print. The trigger was already pulled on plenty of surprising deaths. 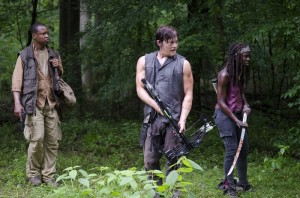 A quick run-through of the first four seasons, kept vague to avoid spoilers. A strong and very well produced first season put the series firmly on the map. The characters were mostly imported from the beginning of the comic and handed to a capable cast. The most notable ‘original’ addition was bow-and-arrow whiz Daryl Dixon (Norman Reedus), who quickly turned into a fan favorite. Not all of the new characters were keepers though. There was one who hung around for the next two seasons, but was never actually given a personality by the writers. He was the equivalent of a redshirt from the Star Trek series who kept surviving beyond all expectation, and it turned into a bit of a running joke. It made me feel bad for the actor, although – hey – a role on a hit show is good even if you’re just window dressing.

Between seasons one and two Frank Darabont left as showrunner, after a major spat with the studio making the series (AMC). An agonizingly slow first half of the second season, which saw the cast hang around a farm while searching for a lost member of the tribe, made a lot of viewers also consider an early exit. Thankfully, the new showrunner (Glen Mazzara) picked up on the criticisms, put his foot on the pedal and euthanized long-running story strands that had outstayed their welcome. The third season introduced a major villain from the comics to great effect, although the writers mishandled one of the mainstays from the comic – and one of my favorites – to such a degree that the character was unsalvageable. 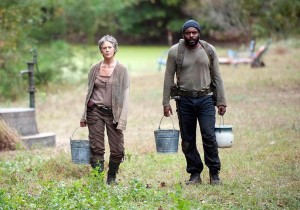 Season four’s first half was possibly a touch slow again, leading up to a spectacular alternate version of a major event from the comics. The second half of the season found the surviving members of the cast scattered, trying to regroup. Seeing some of them paired with others that they had barely interacted with so far, was refreshing and new blood was introduced to replace the spilt blood. The lucky reunions occasionally defied belief, but at least the worst case of such a reunion led to episode ‘The Grove’ (no. 14). This is a particular highlight as a character-piece, almost being a stand-alone. You can imagine it as a Twilight Zone episode. The finale of season 4 saw most of the cast reunited, but in an unfortunate way. And, of course, things ended on a cliffhanger.

Kirkman has stated that the comics and the series are all set – storywise – for a long time to come. Nevertheless, there is a danger that situations may end up feeling samey. The franchise is about surviving and trying to get to a point where life is about more than just surviving. But once there is any headway with the latter, something bad must happen to keep things interesting, knocking people back down. And the bad stuff seems to mostly take the form of psychos who have taken charge now that society has crumbled. The comic book is on its second psychopathic leader by now. 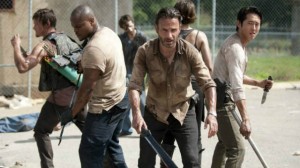 The series can feel a bit aimless. No one has delved into the mystery of why zombies started to exist. This is only addressed a little in the first season, presumably so it could be moved aside and never mentioned again. And it seems unlikely that no large-scale organisation would show up to try to re-establish some sort of order. They can’t all have been wiped out on a global scale. As the franchise has always been averse to seeking a solution to the zombie problem, a fundamental change to the world seems unlikely. 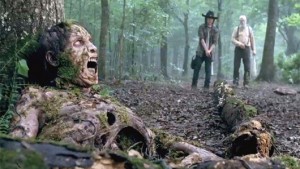 So the big question remains how this series will ever be wrapped up. The basic idea has been ‘a zombie movie that never ends’. The comic book may be able to keep running semi-indefinitely, but the tv-series will likely be forced to wind down a lot sooner. It doesn’t seem likely that the status quo will ever change much. Some people will survive, some will fall by the wayside. As one problem is overcome, a new one will arise. The best bet would be a relatively open ending; bleak, but with a bit of hope. Because that is the tone The Walking Dead, in all its forms, is very good at setting.