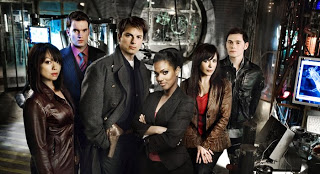 Torchwood is a spin-off of Doctor Who, a British series that has a fan following as fanatic as Star Trek. It has been around since the sixties and after a long time off the air, it was recently revived to great success under the skilful guidance of Russell T. Davies, best known for creating Queer as Folk (the original UK version). Doctor Who is about a time traveller from another world, who jumps back and forth saving the universe, with blatant disregard for the butterfly effect and on a fairly low special effects budget. In the second season of the current revival, the Doctor ran into Queen Victoria, who set up an organisation to keep an eye out for this strange character. Scrabble players may note that Torchwood is an anagram of Doctor Who. Torchwood quickly broadened its scope to secretly studying all sorts of freaky phenomena and alien encounters. There are various incarnations of the organisation in different parts of England (and – of course – in alternate realities), which are working ‘outside the government, beyond the police’ according to the opening credits. The Cardiff team stars in this series and they are lead by the literally immortal Jack Harness (John Barrowman) who has his own past with the good Doctor. Then there are: Gwen (a policewoman drafted into the organisation in the first episode), Toshiko (a tech wiz), Owen (a doctor) and Ianto (concierge/handyman).

Torchwood is deserving of the ‘wood’ in its title, both in the sexual meaning and with regards to the acting. When there is a choice between overacting and underplaying, the cast rarely goes for the latter. Worst offenders in this regard are unfortunately the two leads: Jack and Gwen. I like Barrowman, because the actor is an openly gay charmer, known for flashing his apparently impressive naughty bits on set. And there is an anecdote he tells with enthusiasm, about highkicking on stage towards the audience, while he had diarrhoea. Feel free to fill in the messy blanks. But as Captain Jack he often comes over as smarmy where he should be likeable. Actrice Eve Myles (Gwen) has a tough job, as her character has violent mood swings in between episodes and sometimes even within an episode. Gwen is supposed to be ‘the caring one’ but regularly makes bad judgement calls and can be alarmingly irrational. Nevertheless, Gwen has at least four guys who really, really fancy her over the course of the first two seasons (26 episodes).

This brings us to the topic of sex. There is a lot of it in Torchwood, but it often feels sledge hammered into the plots, as if the writers feel that it is necessary to make the show feel more ‘adult’. But when everybody seems to want to bed everybody else, things start to feel silly. In the second season there is more of a feeling of continuity to the relationships/flings in the series, but there are still the occasional lapses: in one episode Ianto (the pretty boy of the group) is crying over his recently deceased girlfriend, in the next he is shagging – hey, ho – captain Jack, who is his sex buddy. This is all the more bizarre as he was also doing it, in retrospect, while the girlfriend was still alive. And yes: Ianto is bisexual it seems, but then so is everybody else in the cast. All the main characters have had at least one encounter with someone of their own gender. Now, I like to see gays and lesbians represented on television, but it should make some psychological sense and not completely disregard continuity.

Death is also a recurring theme in Torchwood and it ends quite a few episodes on a downer. But the series has an odd concept of an afterlife: there is something, but this something is a vast darkness in which apparently nothing happens. It seems a bit half-hearted as afterlives go. However, death does kick off the most interesting storyline of the second season, starting with the apparent death of one of the main characters. The psychological consequences make for an interesting arc that is actually carried through to the finale.

Torchwood tries to be ‘gritty’ and ‘real’ while telling stories about monsters. In many ways it is the Angel to Doctor Who’s Buffy. It even ‘pays homage to’ Buffy’s concept of a Hellmouth: a pseudo-scientific rationale that is given to explain why so many strange things happen in Cardiff. The link with these series is made stronger by two welcome appearances of James Marsters (who played ‘Spike’ in both Buffy and Angel) in the second season, as a former lover of Captain Jack. As he jokes in the second season finale: ‘It’s all about sex with you people.’ Ironically, Torchwood feels sillier than Doctor Who, because the latter is a full-on, high adventure science fiction series where anything goes, while Torchwood makes unsuccessful grabs at realism. These only serve to make the moments when major threats are averted with some vague techno-babble stand out more. Frequent and obvious plot holes also make it hard to lose yourself in the stories.

There is a lack of coherence to the world of Torchwood, as if no one has thought the whole thing through, to bring all the elements together. Torchwood is a Top Secret organisation, but as the series goes on, apparently every single police officer has heard of them. They drive around in a big black car, semi-inconspicuous, but the windows aren’t tinted and there are bright blue lights on both sides of the front window, sure to catch everyone’s eye. Are they trying to hide themselves or to stand out? It also does not make much sense that their large underground complex is run by only five people, who are frequently the only ones standing in between the world and total disaster. The series takes a stab at addressing this by saying the Cardiff branch

is estranged from the others for unspecified reasons, meaning they are on their own. Why head offices would allow a rogue branch to continue is not clear however and it makes you wonder where all the money for the high-tech gizmo’s is coming from. The first season was very uneven but with the second series, Torchwood is becoming more polished: it has more of a sense of humour about itself and better continuity. In the beginning, the characters were just jumping through the hoops of the plot, being made to act in unbelievable ways. But the characters seem to be wrestling control away from the plots and gaining dominance, which is a very good thing. Torchwood is still on hiatus, but I would like to see it renewed, so that it gets a chance to reach its full potential.

One Response to "Television Review: Torchwood"