Thanks to a bout of flue I recently watched all of the first season of Ugly Betty as a marathon. This is the USA version of a concept that has been travelling the globe in many local forms. It was called ‘Lotte’ in the Netherlands and originally started out as ‘Yo soy Betty, la Fea’ (I am Betty, the Ugly One), a Columbian ‘telenovella’. And my God, it is gay! By which I mean good gay, not derogatory teen speak gay. The central plot concerns an ugly duckling who gets a job at a fashion magazine called ‘Mode’. Well, actually America Ferrara (the actress) looks pretty cute without her Betty gear, but for the series she has been saddled with braces, glasses, big eyebrows, layers of unwieldy hair and an unflattering wardrobe. One thing that is never quite explained is how someone who is such a major fan of Mode magazine (as she says in the first episode) can have such a bad fashion sense. It also seems unlikely that she wouldn’t ask for a make-over by her friend – the in-house ‘seamstress’ at Mode – but it would go against the central theme of the series: stay true to yourself.

She is hired for the wrong reasons but wins her boss over with her honesty and pureness of heart. Yes, really. Soon she is swept up in drama on several fronts; the ones within her own family (Suarez) and the ones within the magazine and – by extension – the Mead family, who owns the magazine. While the usual soap-opera scheming goes on around her, with lies, betrayals and regrets flying around and hurting people who should know better, she faces the temptation to join in the fray, and sometimes has to, but gets busy most of the time with damage-control. Even the people who don’t like her can’t help but secretly admiring her a bit. She always ends up doing the right and moral thing.

Ugly Betty is a classy, intricately designed production. Though the moral involves style frequently clashing with substance, there is no lack of the former. The series makes fun of its own lowly telenovella roots by showing snippets of an amazingly cheesy television soap that the Suarez family likes to watch. Honestly though, the happenings in the ‘real’ series are often just as farfetched. The characters are as colourful as the sets, thankfully, and are played to the hilt by a very capable cast. Rebecca Romijn turns out to make a fantastic transsexual and Vanessa Williams can play a great evil, scheming bitch (as we knew she could). Special mention for the delightfully flaming Michael Urie as Marc, who shines as both the sardonic flunky of the Williams character and as BBFF (Bitchy Best Friends Forever) with ditzy blonde Amanda (Becki Newton). I might as well add Betty’s young nephew to the list (played by Mark Indelicato) who seems to be a budding gay teen, and is accepted without question by his family. Pretty much all the characters are memorable and given enough room to be sympathetic – even the evil ones – as well as multi-layered.

I just started watching the second season and my only fear is that the series won’t be able to top itself. If it starts inflating the drama and the characters to out-do the first season, it might end up só much over the top that the audience will stop relating to it. Added to that, some of the scheming is starting to feel repetitive already, as is the drama within the Mead family. And Betty now either needs to finally hook up with that accountant of her dreams or move on, it has been dragged out for long enough.

Still, any show that has this much charm to spare and this many great one-liners will have me clinging on for as long as possible. As Betty would no doubt tell us: hope springs eternal. 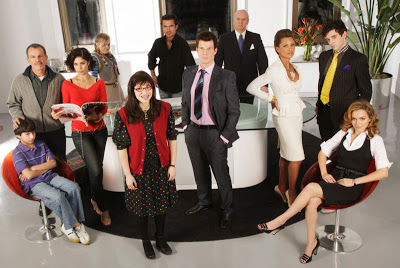