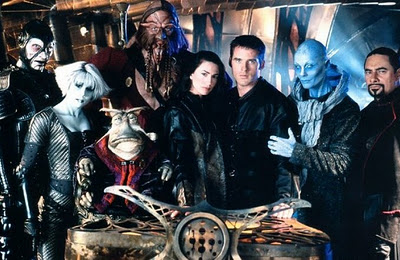 Farscape is a scifi-series which ran for four full seasons (1999-2003) and then got hastily wrapped up in a mini-series. I’d missed out on the original run but have now finally gotten around to watching the series from beginning to end. 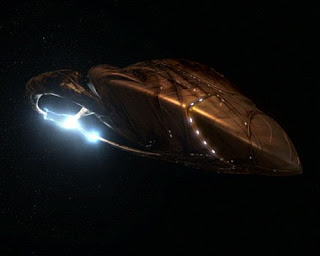 American astronaut John Crichton (Ben Bowder) accidentally drops himself and his space-shuttle through an inconvenient wormhole while on a mission called ‘Farscape’, ending up somewhere quite far indeed. Before he can even get his bearings on the other end of the universe, he is implicated in the death of the brother of a certain Captain Crais, who carries a grudge and uses his authority with the awkwardly named Peacekeeper army to hunt John down over the span of quite a few episodes. John bands together with a group of aliens – this being a relative term of course – who had all been captured by the Peacekeepers and are now on the run on board of a ship called Moya: a ‘live’ ship akin to a space-whale, which has been bonded to an alien to serve as her pilot (who appropriately is simply named ‘Pilot’). There is a blue priestess called Zhaan, who likes to show off lots of her intricately textured skin, has a dark side and is technically a plant. There is D’Argo: a red-faced, passionate warrior with tentacles on his face who resembles a Klingon, but has more of a sense of humor. And there is a small slug-like puppet who floats around on a motorized sled – he’s called Rygel and is a lying, cowardly, greedy little egomaniac who used to be quite a big deal on his home planet until he was deposed. Rounding out the merry little band is John’s love interest Aeryn Sun (Claudia Black): a raven-haired Peacekeeper who despite her dedication to the cause is booted from the Peacekeepers because contact with John has supposedly ‘contaminated’ her. Note to intergalactic organizations intending to establish peace among all species: if blanket xenophobia is part of your statutes and at obvious odds with your main goal, you may need to rethink your basic approach. 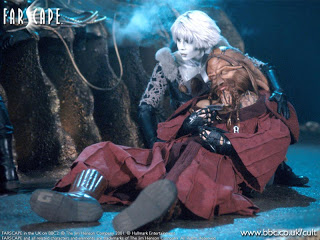 Distrustful of each other at first, the group of convicts grows into a highly dysfunctional family in the end even as it loses some members and gains others. The most substantial late addition is Chiana, a white-haired, grey-skinned, playful sex-kitten. Lesser and more temporary ones are a rather hysterical fellow who can commune with the dead (Stark), a red or orange-haired – literally depending on her mood – spoilt brat whose screams melt metal (Jool), a kooky grandma who has a way with herbs as well as spit (Noranti) and a morally ambiguous special agent whose limbs can be reattached after removal (Sikozu). 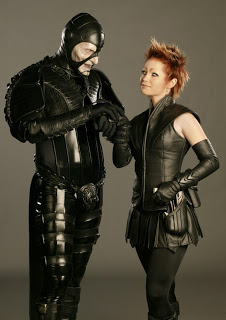 Farscape presents a large and messy universe as seen through the eyes of astronaut John, full of truly alien-looking aliens with odd habits and cultures. And he doesn’t have it especially easy: after sorting out the wrongful accusation of murder, an ancient alien race decides to plonk the secret to making wormholes into his brain which makes him a target for the deliciously Evil Scorpius (Wayne Pygram), who proceeds to chase him unflaggingly for the duration of the series while wearing what looks to be a very tight leather S&M outfit. Scorpius gets inside John’s mind both figuratively and literally, planting a ‘neural clone’ of himself and making John go insane for a bit. All the while, John and Aeryn circle each other as her cold exterior starts to defrost and their mutual attraction becomes undeniable. But there is always something in their way, be it an emotional issue or a second John Crichton or quite simply death. Can these crazy kids get it together while keeping the wormhole technology – which could be used as a horrible weapon – out of the hands of all dubiously interested parties? 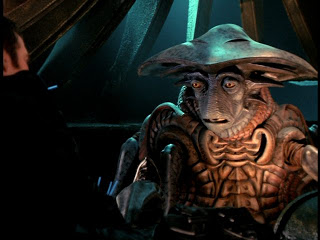 Farscape has a unique look because of the studio behind it: The Jim Henson Company. It was originally meant as a showcase for their creations and some of the scripts had their origin in the design of a particular puppet, rather than the other way around. This means a lot of the aliens look spectacular and there is more variety than you’ll find on Babylon 5, Stargate or Star Trek. However, because the puppets do tend to look as such, it gives the show a deceptively childish first impression. In reality Farscape is fairly adult in a fun and coarse way: bodily fluids of various kinds feature, there is a lot of exotic swearing and the aliens seem to be a kinky bunch sexually, not fazed by variations in physiology or race. Then again, in a galaxy with so much diversity, an intrigued and open-minded attitude seems to make the most sense.

Rather than come up with one potentially interesting idea at a time, Farscape tends to throw handfuls of them at the screen to see what will stick. The more far-fetched concepts make you work hard for your suspension of disbelief and it’s best not to ponder some of the sillier ideas too closely: trying to figure out how Moya the space-whale would actually operate or how she could get pregnant and give birth to an emotionally confused warship, could give one a headache. Farscape is about emotions more than logic: it is the ‘id’ to Star Trek’s ‘super-ego’. This extends to the scripts as well, where character-moments supersede clarity or story flow on occasion. But the fearlessness in trying new things is exciting as a viewer, even if it means you do occasionally sit through an episode which you have to write off as a failed experiment. It’s the price you have to pay for original high-adventure elsewhere.

As is the case with a lot of series, there are episodes which strongly push the overall story arc and some which are relatively self-contained. A not-so exciting sub-category of the second variety is the recurring ship-under-siege set-up, in which Moya and her crew must fend off a threat on the outside or inside of the ship. These stories tend to feature the main cast running around the samey corridors of Moya. A lot. Though a few are done well, mostly you can sense the need to save money powering these adventures, which does make a lot of sense considering how expensive this show must have been to make. The ambition of showing a vast galaxy full of alien creatures while on a tv budget is a lofty one, but can’t have been easy to pull off. 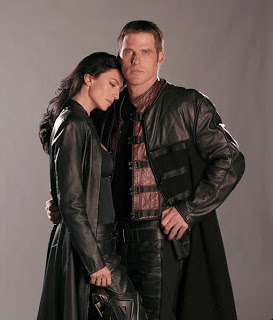 The show originally survived through some complex international funding, season by season, but just as the producers got cocky and took a next (fifth) season pretty much for granted for the first time, the house of cards came tumbling down as the final episode for season four was being shot. Without any closure to running storylines and ending on a massive cliffhanger, it would have been a bad note to leave the universe on. Thankfully, fervent fans managed to make enough noise to get financing off the ground for a miniseries which would wrap things up and could serve as a launch pad for more Farscape. It wasn’t enough of a ratings success to do the latter, but did serve to give a proper, if somewhat rushed, ending to Farscape’s tale of intergalactic high adventure. Even now, years later, there are the occasional rumblings of a web-series or some other form of live-action continuation, but nothing has actually been produced. If you are jonesing for more Farscape after seeing the series, check out the recent comics published by Boom! Studios, which pick up the story where the series left off.

All in all, the show has aged pretty well and the humor, larger-than-life characters and chemistry between the leads – especially John and Aeryn – still stand. The main ‘wormhole’ intrigue does start to wear thin near the end of the series, but doesn’t spoil the fun. If you can get past the puppets which look like puppets and sets which often do clearly look like a set, the series rewards you with many, many ‘arns’ (that’s ‘hours’) of joyful escapism. And with the sight of hunky Ben Bowder running around in leather pants. A frellin’ good time! 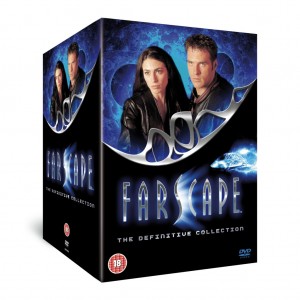 The full series, including the mini-series which ended things, is available as ‘Farscape – The Definitive Collection’ on DVD and soon on BluRay.